Last month we returned to the site of Bagan in Myanmar to complete our third field mission in support of this tentative UNESCO World Heritage Site.  Home to over 3,000 temples within a 26 square mile plain, Bagan ranks as one of my favorite CyArk projects as the beauty and scale of the site is stunning.  Our work at Bagan started in May of 2016 when CyArk, in collaboration with Carleton University, the Myanmar Department of Archaeology (DoA) and the cultural unit of the UNESCO Bangkok Field Office worked to capture 3D data of several significant temples.  Shortly following the fieldwork, a major earthquake struck, damaging numerous temples throughout the valley.  In coordination with UNESCO and the DoA, CyArk and Carleton University returned to the site in late 2016 to conduct emergency documentation of (7) key temples with additional aerial survey of (2) temples.  Based on the immediate needs of the site CyArk put together a third mission focused on capturing and producing GIS products for use in nomination dossier required to submit Bagan for inscription on the UNESCO World Heritage List as well as providing detailed documentation to assist in active conservation now underway at the site.

This third mission took place in late April when I traveled with Anthony Fassero, Christopher Dang and CyArk’s Photographer in Residence Kieran Kesner for two weeks of work on site. The team utilized drones, laser scanners and photogrammetric rigs for data capture resulting in 4TB of total data. CyArk coordinated the mission to Bagan through the Cultural unit of the UNESCO Bangkok office with assistance from Duong Bich Hanh, Montira Unakul and Manithaphone Mahaxay (Noi) . CyArk coordinated day-to-day activities with Aungzaw Min, Junior Officer at the Department of Archaeology.

The work on site was divided into aerial documentation of large areas of the site for the purposes of developing GIS maps and detailed documentation of specific monuments to aid in active conservation and comparative analysis.  Drones have become an integral part of our process, allowing our team to cover large portions of the site very efficiently.  For this project we utilized two DJI drones to fly nearly 400,000 square meters of the site in order to generate building footprints of numerous monuments.  The data collected by the drones is used to generate a 3D model of the monuments captured which is then used to extract contour lines for incorporation into the site-wide GIS mapping system.

Much of our detailed documentation was focused on the Ananda Ok Kyaung monument, which has been prioritized for conservation and stabilization.  The monument contains spectacular murals but the monument and its structural integrity were damaged in the last earthquake.  We used a combination of Faro laser scanners, drones and robotic photogrammetric camera mounts to record the structure in great detail.  You can see more of the structure and the technology we used in the below video:

One of the highlights of this trip was being able to see how our work is providing immediate benefit to those working on site.  In recording the murals inside the Ananda Ok Kyaung monument, we were able to capture such a high level of detail and accurate color information that is was easier to inspect the digital version of the murals most closely than the physical murals on site due to their location and limited onsite lighting.  It was rewarding to show the digital model with one of the members of the DoA charged with the conservation of the murals to see their reaction to the outputs we can provide.  The data is being used to generate very high resolution ortho-image elevations and sections for the conservation teams working on the assessment and analysis of the monument.

The team has now returned to the CyArk offices and has begun to process the data collected to produce the outputs most needed by the site.  Keep up with the latest through our social media channels on Facebook, Instagram and Twitter. 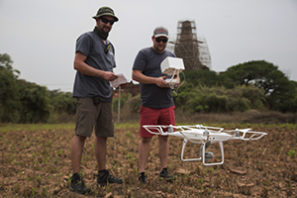 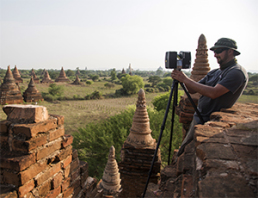 Bagan project team, Kieran Kesner, Christopher Dang, Anthony Fassero, Aungzaw Min of DoA and Scott Lee pose for a photo at the end of the trip