This is the fourth post in our monthly blog series titled “Heritage at Risk.” Each month, we will highlight one risk factor that threatens our heritage and how CyArk’s mission can help preserve our history.


Natural disasters have always posed a significant threat to mankind. Despite worldwide efforts to mitigate their effects through warning systems, disaster preparedness and management programs, the increase in frequency and intensity of natural disasters today has caused governments to place a major emphasis on the protection of human life and, increasingly, cultural property. Although numerous studies on disaster mitigation have produced novel ways to reduce the vulnerability of human populations, the effort needed to protect threatened monuments of historical and archaeological importance continues to grow. Earthquakes are a major destructive force of cultural heritage sites, with the capacity to cause irreparable damages or even turn ancient sites into piles of rubble. The secondary effects of earthquakes--tsunamis, landslides, ground fractures, etc.—pose an equally great, if not larger, threat in terms of their potential to subject heritage sites to conditions site managers were not prepared to handle. Many historic cities have witnessed these catastrophic happenings in the past few centuries, and a few have managed to thrive while keeping their history intact. The Basilica Cathedral in the historic city of Arequipa, Peru and the Erwang temple on the banks of the Dujiangyan Dam in the Sichuan Province of China are two such examples.


Arequipa, in south Peru is a charming city located in the heart of the Colca Valley. Set amidst volcanic mountains, the city is known as the “white city” due to a vast number of buildings constructed out of a 'Sillar', a white stone of volcanic origin. The architecture of the buildings in its historic core represents an exquisite blend of European and native cultural influences. The city has suffered a series of earthquakes since its origins and the historic core has taken the brunt of it all and survived. The Basilica Cathedral of Arequipa was the first structure to be erected in the city. Known for its magnificent facade and grandeur in size, the construction for the cathedral began in August 1540 and was completed in 1556.

Image showing the damaged portion of the Basilica Cathedral from the 2001 quake. (Photo credit: Lima Easy).
The first recorded earthquake struck the vicinity in 1583, causing severe damage to the cathedral. In 1590, the city initiated plans to rebuild the church with a new design. However, earthquakes concurrent with a massive eruption of the Huaynaputina stratovolcano destroyed a part of the structure. In 1604, another earthquake completely destroyed what remained of the structure. A new cathedral was completed in 1656. Thereafter, earthquakes in 1666, 1668, 1687 and 1784 caused minor but noticeable damages to the cathedral. The 13th of August 1868 saw severe damages to the cathedral when a violent quake destroyed the towers, a portion of the main portal, facade arcs and the altars. The last earthquake struck in June 2001, with a magnitude of 8.4 and caused two towers of the church to collapse and brought severe damage to the historic core of Arequipa. The cathedral was restored to its former glory in 2002. The basilica today stands as one of Peru’s most unique cathedrals from the Spanish colonial era. In 2000, the historic core of Arequipa was inscribed as a UNESCO World Heritage Site.


An area historically prone to earthquakes, the Sinchuan province in China is home to thousands of protected and unprotected cultural heritage properties. The Erwang (“two kings”) temple was first constructed almost 2000 years ago and was reconstructed during the Qing Dynasty. It was built to commemorate the construction of the Dujiangyan Dam by Qin governor Li Bing and his son who devised the historic Dujiangyan irrigation system. Recognized as a UNESCO World Heritage Site, the Dujiangyan irrigation system is the only known in-use grand water irrigation project built in the earliest age in human history.

Image showing the destruction to the Erwang temple entrance from the quake in 2008. (Photo credit: China Daily).
This temple complex is located on the eastern banks of the dam and has a precise architectural layout featuring a combination of temples and gardens. The layout of the temple complex is separated into two sections; the eastern portion showcases gardens and the western portion contains temples and halls. The temple is structured using wooden Chuandou frame and adapts to the site’s natural topography and harmoniously blends into its surroundings. The main hall and inner shrine contain the statues of Li Bing and his son.


When a major earthquake struck the region in 2008, several important heritage sites were inevitably affected, and the Erwang temple suffered serious structural damage. The entrance gate was destroyed; and several shrines and halls collapsed. Several historic artifacts and edifices located within the temple complex were also lost. With financial assistance from the Chinese government as well as international support and expertise, the temple was restored to its original style and form. The collapsed portions of the temple were rebuilt, and the parts that withstood the quake were further strengthened by laying additional foundations and support. The temple was reopened to the public in September 2013.


The deterioration or destruction of cultural heritage sites from natural disasters such as earthquakes constitute a terrible loss to humanity’s cultural heritage as these sites are of a great value and are irreplaceable. While an immediate post-disaster recovery plays a vital role in saving affected heritage sites, the use of CyArk's 3D laser scanning technology may still be the best hope of capturing the world’s cultural heritage sites so they are not entirely lost to future generations. With the measurable digital data produced by 3D laser scanning and photogrammetry, there is the possibility that damaged monuments and historic structures located in highly earthquake prone regions can be conserved, restored or one day accurately rebuilt to their former glory. Additionally, transfer of the 3D laser scanning technology provides local technicians with a tool to defend their heritage. While it cannot physically resolve all the damages caused by the forces of nature, digital preservation is an important first step. 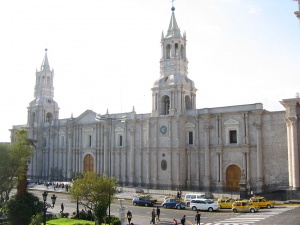