A Re-cap of the 2 week scanning portion of the project at Mt. Rushmore

by Elizabeth Lee
After several weeks on the road, I am back at CyArk headquarters in Oakland, CA. The biggest event over the last few weeks has been the completion of our work at Mt. Rushmore. During the project, Mt. Rushmore National Memorial did a great job of creating a daily journal for the project. (If you haven’t taken a look, please do as it gives a great account of the day-by-day progress and excitement.) Now that the teams are home and the dust has settled, we thought it appropriate to re-visit some of the project highlights.

By far the best thing about the project was the incredible team. A truly diverse group, we had surveyors, architects, archaeologists, Harley-riders, ex-military personnel, interpretive rangers, historians, filmmakers, Americans, Canadians and Scotsmen all working together to accomplish the goal of digitally preserving Mt. Rushmore. The project posed its share of challenges, but throughout the project the team exhibited "Grace under pressure." (A phrase repeated many times by Mt. Rushmore Director of Safety Paul Hammett)

It would be impossible to tell all the stories of the project in a single blog, but I will try to highlight just a few of the memorable things. We are also in the process of pulling together other members of the team to write blogs about specific aspects of the project. If there is anything you have questions about or would like to hear more of, let us know in the comment section of the blogs.

Best Moment in Week 1: Seeing the first scans from the top of the mountain

The first scans of Lincoln from the mountain

The weather had made it impossible to access the mountain and scan early in the week. It was only over the first weekend that we were afforded enough of a window to get the equipment to the top and start scanning. When the memory stick with the data on it came down the mountain, we were all very anxious to see the first results. Once the data had imported into Cyclone, we were treated to a view of Lincoln different than anything we had seen before. The scans turned out beautifully, revealing a huge amount of detail on the faces and carved surfaces. These initial results became a huge motivator for the work moving forward.


Most Unpredictable Factor: The weather

It didn't matter who you spoke with on the team, the conversation almost always turned to the weather. This is not to say that we had a team of bad conversationalists, only to emphasize what an important role the weather played in the project. We experienced so many different types of weather we were never sure what to expect. We had everything from rain, to snow, to heavy fog, to brilliant sunshine, to tornado warning winds, to hail the size of golf balls, to perfectly calm days. It certainly kept things interesting. Thankfully the team was flexible on their work hours, even starting as early as 5:00am to make the most of the good days.

First Area Scanned: The Interior of the Sculptor's Studio

Scan data from inside the Sculptor's Studio

Given the snow and rain the first week of the project, the only thing to scan was the interior of the sculptor's studio. This data will be used to create a tour of the studio and Borglum's scale models used to design the sculpture. Borglum designed on the scale model in his studio and then his vision would be carried out on the mountain. The model of the sculpture is incredible because the presidents are sculpted complete to their waist. The sculpture on the mountain was never completed however, so this model provides the only glimpse of Borglum’s original intent. The scans and video fly-throughs created from the data will be particularly useful to the park for interpretation during the winter months when the studio is closed to the public.

Most Daring Scan: Tie between Inverted 6100 Suspended from the CyArk Rig on Washington's Brow and the C10 from the Talus Slope


Throughout the project, the team needed to think creatively to get the job done. This included pushing the boundaries of the equipment and the scanning locations. All the scans completed from the Rig itself were pretty daunting, but the ones that took the cake occurred on the last day, when the 6100 was inverted in order to capture more details on Washington. The ropes team did an incredible job maneuvering the Rig and getting the scanner safely into position. When the position of the scanner on the Rig made wireless access from above difficult, the ropes team was able to successfully complete their first scan by listening to step-by-step instructions over the radio. It says a lot about the guys on the mountain to be able to successfully operate an upside-down scanner for the first time, while being suspended off a mountain. Pretty incredible.

The other incredible scan moment occurred when the team pushed the boundaries and were able to set up a scanner in the middle of the talus slope. The talus is the large debris field at the base of the sculpture. Large boulders, some the size of Cadillacs, which were blasted off in the carving rest unsecured on the hillside. The importance of the scan won out over the uncertainty of the slope. Thankfully more brave NPS team members stepped up to the challenge to move and operate the scanner. Everything worked correctly and the team made it off the slope without any problems.

Part of the team finishing up dinner at the Firehouse

Although the team frequented a few of the local places more than once, the resounding favorite was the Firehouse Brewing Co. in downtown Rapid City. A good selection of food, and of course beverages, made this a popular choice after a long day. (The buffalo blue burger was my personal favorite.) Pauly's came in a close second, right next to CyArk favorite Teddy's Deli.

There are many more stories from the project than I have room for here. I have a lot of memories from the 18 days on site that will stay with me for some time. What sticks out most however, is the way the team came together over the project. By the end of the two weeks it didn't matter if you were NPS green and gray, Scottish blue and white, Art School black, or CyArk orange, we were all one team. We were united in our goal to digitally preserve an American treasure. I am very grateful to all those involved in this project, and I am honored to have been a part of it. 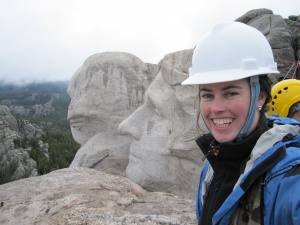 My first trip to the top of Lincoln, one of my best memories from the project