by Scott Lee
John Muir, Scottish-born American naturalist famously known as the Father of the US National Park movement, might have been surprised to see CyArk’s production team descending last week on his Victorian home in Martinez, CA to digitally document it inside and out. Though 3D laser scanning technology was still many years off from being invented during Muir’s lifetime, the goal of digital documentation mirrors much of Muir’s life work as the aim is to make these special heritage sites accessible for people to explore and learn about, and to help preserve them for the appreciation and study of future generations.

Last week an expert team from CyArk scanned the interior and exterior of Muir’s Victorian mansion, which was built in 1883 and is located nearly 30 miles north of San Francisco in Martinez, California.

The John Muir National Historic Site is open to the public and is maintained by the US National Park Service. Visitors can tour the grounds and artifacts from the Muir family’s daily life are on display, conserved in excellent condition. Originally situated on 2,300 acres of land, the site today encompasses just 9 acres, but the original house still stands, as do many of the peach trees from the extensive orchards Muir and his family planted.

CyArk’s 3D laser scanning of the site took place through a collaboration between the US National Park Service, Historic Scotland, Scottish Natural Heritage, and the John Muir Birthplace Trust. The data generated from the scans at Martinez will form a part of the transatlantic partnership between CyArk, Scottish Natural Heritage and Historic Scotland to document Muir’s birthplace in Dunbar, Scotland and his home in Martinez, California.

The scanning data will be shared with conservators at Muir’s childhood home in Dunbar and his home in Martinez to assist with improved site management and interpretation. Additionally, mobile apps and information kiosks will be produced for both sites.

This project and John Muir’s wide-reaching legacy is a key part of Scottish Natural Heritage’s Year of Natural Scotland celebration. In 2014, Scotland “Welcomes the World” through its Homecoming program. A key element of this is a John Muir Festival which will take place in late April 2014. Apart from highlighting this digital project, the Festival will also include the opening of a new walking, cycling and riding route across central Scotland between Dunbar and Helensburgh designed to help more people to explore the outdoors and experience nature at first hand.

Richard Davison, Scottish Natural Heritage, welcomed the start of the work saying that, “It’s great to see this transatlantic project taking shape. We’re all looking forward to making visitors' experiences in both the UK and the US even better, as well as strengthening the ties between Scotland and the USA on the life and legacy of John Muir.”

John Muir National Historic Site Superintendent said: “We are excited about the opportunity to make connections with Scotland, the country of John Muir’s birth, in an effort to have more people learn about his long lasting legacy. The work by CyArk will allow us to document these historically significant sites and share them with everyone in a meaningful way, even if they can’t visit us in person.” 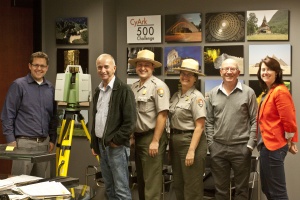 Members of CyArk, NPS and Scottish Natural Heritage meet at the CyArk office after the completion of the fieldwork 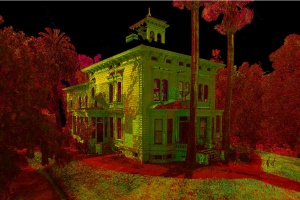