A Straight and Gleaming Tower of Pisa

by Charisse Sare
The Leaning Tower of Pisa at Piazza del Duomo is one of the most recognizable wonders of the world. But with hundreds of years of stress, pollution, tourists and pigeons, the Tower was in need of some help. The marble was cracked, blackened and yellowed. Rain, wind and pollution left some places wet, deteriorated, eroded and covered in dirt. The tower needed to be fixed and cleaned.

Fearing that the tower would come crashing down due to its unstable foundation, the Italian Ministry of Public Works set up an International Committee in 1990 made up of structural and geotechnical engineers, geologists, architects and restorers. The Committee was turned into the new Committee for Safeguarding the Tower of Pisa in 1997. It consisted of 14 Italian and foreign members. Under the guidance of architect Gisella Capponi of the Central Institute for Restoration (Istituto Superiore Centrale Per La Ed Il Restauro), it took a little less than 10 years and $7.8 million to restore the tower using pressure washers and solvents to clean the stone and injected chemicals to strengthen the stone. Laser cleaning was also employed on the Tower, just as it was used to restore the Cloister at Saint Trophime.

The axis of the tower has been secured and straightened from 5.5 degrees to 3.99 degrees. Experts hope that nothing further needs to be done for the next 200 years.

More Info:
Tower of Pisa clean but still leans
Pictures of the Restoration

More Ways to Clean
Sometimes it takes more than just a bit of elbow grease to get something clean, especially if its a delicate piece of art. Bacteria are being used to help restore 400 year old frescoes in Valencia, Spain and Italy.

The bacteria used in these restorations is from the Pseudomonas family. It is being used as a non-toxic cleaner, safe for the art and the environment. It was originally developed by Giancarlo Ranalii, an Italian microbiologist, and set to use on restoring the frescoes of Compo Santo di Pisa. The bacteria was used to remove hardened glue in the restoration of the Italian frescoes. In Spain, the bacteria was trained to “eat” away at the salt crust deposits while maintaining the integrity of the paintings.

Black pollutants laser cleaned off <a href="/photograph-looking-east-at-column-capitals-12-13-along-the-north-wing-depicting-the-sacrifice-of-issac-with-one-face-showing-issac-and-abraham-walking-together-the-next-depicts-the-angel-halting-the-sacrifice-and-the-third-depicts-the-ram-being--media">Capital 12-13</a> at Saint Trophime. 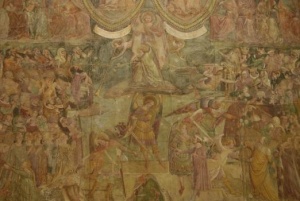 Bacteria helped to remove the glue from the Compo Santo di Pisa frescoes.