Adventures in Archaeology at Monte Alban

by Elizabeth Lee
Four full days in the field resulted in lots of scan data, lots of photos, and lots of scrapes and bruises but little energy left to blog. In an effort to make this the first official CyArk blog from the field, I am writing this from the airport in Mexico City. What started as a two day field project and workshop at Monte Alban quickly turned into a tour de scan of the Oaxaca Valley. The first morning I traveled from historic Oaxaca to Monte Alban with Frank Collazo of Leica-Geosystems and Adrian Lopez of SYSTOP . We were given a tour of the site by archaeologist Lucia Cazares Munguia and then got to work on Systema IV. This group of structures was selected because they represent a good example of a typical building at Monte Alban. We did an initial walk of the site to scout for scan locations, followed by comprehensive planning and mapping of all scan locations. The system is quite large, with two interior tunnels, and careful planning had to be done to ensure we could finish in two days. Scanning went very smoothly with the exception of the final 3 scans on the second day. I had left Frank scanning to capture several of the supplemental panoramas around the site. I was at the far north end of the site when I noticed the dark clouds gathering both in the northeast and northwest. The sound of thunder quickly followed and I hurried back to Systema IV in the hopes of helping Frank pack up. Unfortunately he was just starting the final set of scans which would lead him into the tunnel. The tunnel was so narrow that only he could be inside while scanning with the Leica 6000. This left me outside with Eric Powell, who was joining us from Archaeology Magazine. We began to pack up the gear just as the rain started to fall. I gave up my raincoat to protect the then unused Leica 3000, while Frank made his way into the tunnel. Both storms converged over Monte Alban, leaving myself and Eric with no where to go in the downpour. The rain and combination of sudden winds was a lot colder than I expected and we took shelter under a large tree. We had just finished discussing the threat of lighting when all of the sudden, about 40 feet away and just over the top of Systema IV a huge bolt of lighting struck. It scared us both half to death, but we didn’t leave the tree.

About 15 minutes later Frank finally emerged from the tunnel having successfully completed the final scans. The rain was finally starting to subside but both Eric and I were drenched and ready to get back to the hotel to dry off.

The next morning we presented the initial results to a large group of archaeologists from Monte Alban and several CyArk supporters. They were so encouraged by the technology that they insisted we do several more projects in the next two days. The first one was a breeze, scanning the original stelas from Monte Alban which are now in the site museum. Having completed that in only an hour, we drove out to an unregistered archaeological cave site in the valley. Since the site is unregistered, and fairly unknown, I don’t know how much I am able to write about it. I will say that in order to reach the cave we had to machete a path up to the outcropping, free climb into a crevasse, and maneuver our way out onto a very small ledge. The spaces we climbed through were too narrow for the scanner, so we had to use a rope to hoist the machine up to the ledge. A few close calls with both our bodies and the scanner resulted in two completed scans of the area. It's back to the office to take a look at the initial results, but this trip was by far the most extreme scanning experience I have ever had. 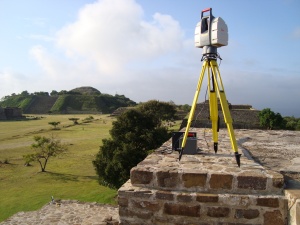 Scaning on top of Systema IV 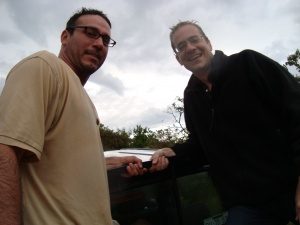 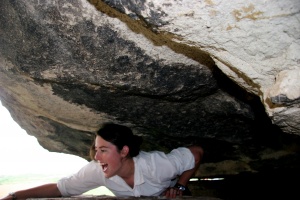 Me climbing and almost falling into the cave