by Nicole Medina
On May 8, 2009 officials in the Ancash region of Peru announced the discovery of stone tenon heads estimated to be 4,000 years old. The tenon heads were discovered in the Huaylas district at an archaeological site near the town of Chupacoto. This date suggests that the Chupacoto carvings are older than the tenon heads of the renown archaeological site, Chavín de Huántar. Chavín de Huántar, also located in the Ancash region, represents the first widespread, recognizable artistic style and culture to extend its influence across the Andes.

Archaeologist Daniel Chumpitaz reported that this discovery could indicate that the Chavín culture originated in Chupacoto. Further study of the stone heads and other Huyals archaeological remains is needed to determine the influence and role of the Chupacoto heads.

The stone tenon heads of Chavín de Huántar are one of the site's most iconic features. Decorating the exterior of the New Temple complex at Chavín, the stone carvings are found in a wide range of styles and forms, ranging from anthropomorphic to supernatural zoomorphic forms. Archaeologists believe that the heads may also depict the transformation of human to feline forms. Some of the Chavín sculptures appear to have mucus coming from their noses, a possible reference to the use of hallucinogenic drugs used in shamanic ceremonies. The use of psychotropic drugs, such as Amazonian Ayahuasca or local San Pedro Cactus, has been supported indirectly through the archaeological record.

The tenon heads were originally located in the walls of the exterior of the New Temple complex in Chavín. Many of these heads have been relocated inside the temple galleries to protect them from the weathering. The last remaining tenon head still in situ is protected by modern overhangs on the western wall of the New Temple.

During the summer of 2004 and 2005 a team from UC Berkeley and CyArk laser scanned and digitally documented the site of Chavín de Huántar and several artifacts from the site. Short range laser scanners were used to create extremely detailed 3-D point clouds of the Lanzón stele and one of the tenon heads.

A video of the tenon head's 3-D point cloud can be viewed on the CyArk website. This video provides a 360 degree view of the tenon head. The long stone piece extending from the head of the carving was wedged into the exterior of the temple to allow the head to protrude from the wall, as seen in the photo of the in situ head. Additional information, photographs, panorama and 3-D laser scan data from Chavin are also available. 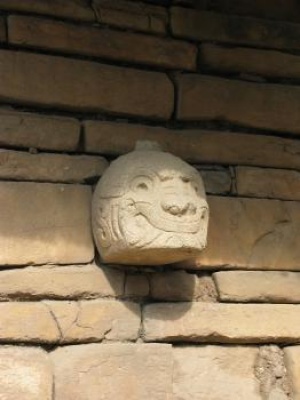 The last remaining in situ <a href="http://archive.cyark.org/enoned-head-building-a-media">tenon head</a> at Chavín de Huántar is located on the exterior of the the New Temple's western wall.