by Dan Walsh
The University of San Francisco, my alma mater, has been steadily making remarkable improvements to a number of the buildings on campus since my graduation in 2006. The newly renamed Kalmonowitz Hall is one such building. As part of the new design, it was to include a stone portal as the backdrop of an outdoor student amphitheater. The portal itself dates back to 16th century Spain, and as is common with items of this size, has been disassembled numerous times to facilitate transport to new ownership. The portal was in pieces when it was gifted to USF by the Fine Arts Museums of San Francisco. Worries loomed that without a solid piece to work from, the construction team would be unable to create adequate support for the structure.

USF, who has been a long-time CyArk partner, requested that we scan the individual pieces and virtually reconstruct the portal in order to facilitate construction. The individual stone sections were scanned and a model was produced by INSIGHT, another CyArk partner (read more about the scanning). Armed with an accurate rendering of the portal, USF engineers set to work creating appropriate support structures.

Actual construction of the portal has since begun, but given the unorthodox method of planning, it's no wonder there were a few hiccups. An inside source at USF informed us that the engineers working on the project didn't trust the laser scan data. They thought the measurements were two inches off, and so adjusted their plans accordingly. When physical reconstruction began, they discovered the laser scan data was indeed correct, and had to revert to the original plan.

I stopped over at USF a few days ago to take a look at the portal. Construction was moving along, and what was completed so far looked great. USF has mentioned a forthcoming compilation of time lapse photographs showing the portal's reconstruction from start to finish. We will write more about the Ovila Portal as assemblage progresses. 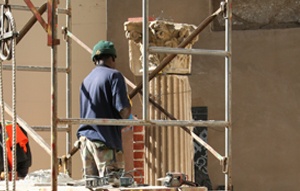 Anastolysis, the act of rebuilding a structure from it's original parts, shown here on the Ovila Portal 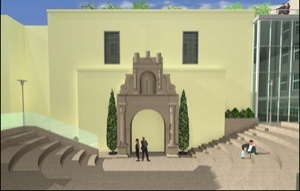 Artist rendering of the completed portal and amphitheater