An Island's Destruction is a Boon to Archaeologists

by Lili Siegenthaler
Ever hear the old joke about the man who tried to forge ancient coins, but got caught when scholars noticed they were stamped “52 BC”?

Archaeologists hear this joke and give a wistful sigh. If only it were so simple! If only every excavated find came with a tag, complete with the date it was built or created! No more messing around with radioactive isotopes and the carbon cycle; no more bickering between professors over whether a certain type of bowl belongs to the Late Minoan IIIA or IIIB period. If only!

Well, sometimes the Earth gives us a break. Every so often, something so big happens – usually a natural disaster – that its presence in the archaeological record is both instantly recognizable and incredibly useful for establishing a fixed, non-relative date at a given site. The only drawback is that these disasters are usually so huge that they wipe out everything in their path. A great example of this type of event is the meteor strike that many scholars believe was responsible for the extinction of the dinosaurs.

Thera (modern-day Santorini), a small island in the Cyclades north of Crete, was transformed into a crescent shaped crater in the Aegean after the volcano lurking underneath it exploded sometime in the Bronze Age. If you go to Santorini today, you can still see the steep cliffs created in the caldera by the eruption; scientists have likened the event to the detonation of a nuclear bomb. The contemporary towns on the island, probably small outposts of the Minoan culture flourishing on Crete at the time, were obliterated and buried under 60 meters of ash, similar to Pompeii (although one notable difference is that since the people of Thera were able to recognise the signs of the impending eruption, there are surprisingly few bodies of islanders who were caught in the ash). After the eruption left a crater in the sea, the force of the water filling the vacuum caused a tidal wave.

When the dust had literally settled, the eastern Mediterranean found itself coated in a layer of volcanic ash – in Greek, tephra. The depth of the tephra ranges from site to site, but because it all originated from the same place – the Thera volcano – it all has the same geo-chemical makeup, almost like a unique signature. Therefore, when an archaeologist finds a layer of tephra at her site in the eastern Mediterranean, she doesn’t have to go through all the complexities of carbon dating – all she needs to do is compare her ash sample to the Theran tephra. If they match, the archaeologist knows her tephra layer is contemporaneous with the destruction of Thera.

There is one last wrinkle, of course: archaeologists can’t seem to agree when, exactly, Thera exploded. Because scientific dating can only give us a broad window of time when the tested event occurred, we have a period of perhaps thirty years during which the volcano erupted – somewhere between 1610 and 1640 BC. However, some scholars insist that this date contradicts all the textual evidence from Egypt, and that the explosion must have occurred at least a hundred years later than that. Even with science on our side, the sagas - and dramas - continue... 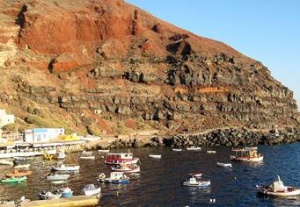 The cliff-face of the Santorini caldera. 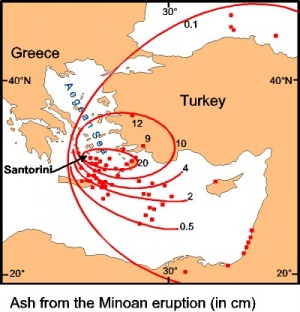 Map showing the spread of the tephra cloud following the eruption.