by Adam Frost
Yesterday marked the launch of the transatlantic project ‘Celebrating John Muir in the digital age’ in Dunbar, Scotland, with the unveiling of the project’s interactive digital content and an intricate commemorative carved stone plaque linking John Muir’s birthplace in Dunbar with his home later in life in Martinez, California. This launch follows the earlier unveiling of a sister plaque at Muir’s home in Martinez in April, a successful event attended by Scotland’s Minister for External Affairs and International Development Mr. Humza Yousaf and Mr. Mike Cantlay of Visit Scotland.

The celebration aims to illustrate John Muir’s story and the significance of his work in environmental conservation and advocacy by providing virtual access to two residences which greatly inspired Muir's work. His homes in Dunbar and Martinez were recorded in August and September 2013 through the use of high resolution laser scanning survey and panoramic photography. This detailed information is made accessible to the public through animations, imagery, and 3D models accompanied by histories and orated personal experiences from Muir's writings.

The project partners are a consortium of organizations from Scotland and the United States: Scottish Natural Heritage,The U.S. National Park Service, East Lothian Council,The John Muir Birthplace Trust, Historic Scotland and CyArk. At the launch, speeches from Scottish Natural Heritage’s Richard Davison and Historic Scotland’s Lyn Wilson introduced the project to the attending class of primary 6th (elementary) children from Dunbar Primary School, allowing the young class to explore the Birthplace's new iPad kiosk after its unveiling. This kiosk includes the virtual tours for both sites as well as the 3D rendered reconstruction of the John Muir Birthplace, which unlike the well-preserved Martinez home, has been significantly altered since the Muir family’s residence in the 19th century. This model was informed by a range of historic research, documentary evidence, and the 3D survey of the building, and serves as an informative tool in providing a unique perspective of the past.

This project represents an international bridge between organizations in the US and Scotland dedicated to the conservation and curation of natural and built heritage. Through enabling wider access to these historic sites, the project will also facilitate better learning and engagement with John Muir’s life and history, underlining his impact around the world and his ongoing influence on modern environmental movements. Explore the John Muir theme for more information and content about the Dunbar and Martinez projects. 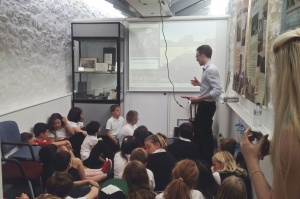 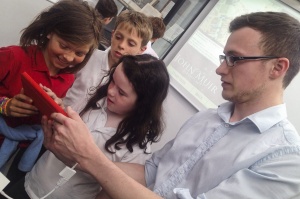 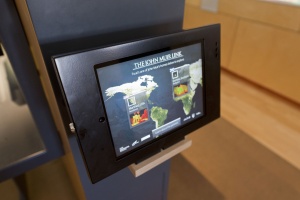 The interactive kiosk in place.