by Justin Barton
Over the last year, we have developed a very close partnership with the Center of Preservation Research (CoPR) at the University of Colorado, Denver. The partnership which began with our work together on Fort Laramie, has expanded to the creation of a technology center at Denver with 3D laser scanning capacity. This included working with the university to acquire scanning hardware and software, as well as train the CoPR team on using the technology for digital heritage preservation. After a successful training in May, the team at CoPR was ready for their first field project with the scanner. I was fortunate enough to join the team for the first exciting project.

I flew out to Denver, Colorado from California Monday morning, August 16th and met up with Mike Nulty of CoPR. Mike and I proceeded south-west across the vast and immensely beautiful state toward our next stop: Cortez, CO (near the Four Corners area of the USA). With a Suburban-full of scanning and camping gear, we made our 7+ hour drive. The following morning, we met up with Kat Vlahos, the Director of CoPR, and Linda Farnsworth and Jim Head of the Bureau of Land Management (BLM). We were then escorted out to a distant country-side road where we left our car behind, packed our gear on horses. Yes, horses.

Poor Sugar (one of the three packing horses) was very frightened by the big, black box containing the scanner. With the pelican case only partially attached, Sugar neighed and reared up on hind legs and bucked the case right off. But that pelican case proved worth every cent and the scanner worked just fine.

After that excitement, we headed into the brush of the desert landscape, hiking about a mile to a remote, undisclosed location (undisclosed to protect this very fragile heritage site). After a brief site tour, Mike and I went to work to Digitally Preserve "Parallel Wall House", a two-story, eight-room sandstone structure built over 1000 years ago by the Ancestral Puebloans (formerly known as the "Anasazi"). The structure has suffered considerable collapse and the entire second floor is gone, leaving partial ground-floor walls. It is however the best preserved structure on site. Mounds of sandstone-brick rubble scatter the immediate area and indicate other walled structures, a former tower, and a few kivas . The tallest wall of the 'house' still stands at two stories, but is awkwardly set with a severe lean. The BLM opted for Digital Preservation as a method to accurately document this secluded fragile structure before it too is lost like its neighboring counterparts.

The moon begins to shine brighter over Parallel Wall House as the sun sets for the first night.


As night set in, we settled into our tents for our first night of remote, isolated camping. You'd think it'd be pretty quite out there in the middle of no-where, but crickets are very loud! ALL NIGHT loud.

Mid-afternoon the next day we finished our last scan of Parallel Wall House and then undertook the very precise science of packing horses yet again. Seriously, it's a lot of work to get a perfect balance of gear on both sides of the horse and it requires a LOT of fancy knot-work to keep it all in place. I have to say, our packers were an expert crew and a friendly bunch. I know I speak for Kat, Mike, and the BLM staff when I say we would all love to work with them again on future expeditions.

It wasn't until late afternoon Wednesday that we arrived at our second site after packing, unpacking, driving, repacking, hiking, and re-unpacking the horses. This site, Saddlehorn Hamlet, is accessible to the public along a trail in Sand Canyon, part of the BLM's Canyons of the Ancients National Monument. It's a classic Ancestral Puebloan cliff dwelling like those seen at the Mesa Verde National Park . This site was awe-strikingly beautiful as it was placed in an alcove in a red, white, and yellow striped sandstone cliff with various "saddle horn" shapes at the top, caused by millennia of erosion. We had time for one long scan of the entire cliff facade before dark, so we set up the equipment and then setup camp. Unfortunately, about half-way through the 85min scan, a storm we had been watching in the distance finally arrived. Thunder, lighting, a bit of rain. We had to cancel the scan, take down the equipment and cover it all up in tarps. Despite the drizzle of rain all night, we were pretty lucky as the skies to the East and West were black with heavy downpours and flashing with bright lighting.

When Thursday morning rolled around, the hot Colorado desert sun dried everything in minutes once it broke out around 8:30am. We finished our first scan of the facade from the night before and set out to document the rest of the structure. It was smaller and a lot less complex than Parallel Wall House so we managed to do it in about half the time (with half the scans).

Linda, bless her kind soul, met us around 3:45pm Thursday afternoon to help us pack up camp. She brought us large Cherry Limeades from the Sonic Burger joint in town. After 3 days in the hot desert sun, that large, heavily iced, Cherry Limeade was one of the best things I ever had. About 4:30pm the horse train came clopping into camp, we loaded up, hiked back out, and all parted ways. But not for long, I'm sure. I told the rest of the crew that I've been scanning for 5 years and I've never used pack animals before, so this certainly was a memorable experience!

It was a great project, the enthusiasm from everyone was inspiring. I hope to be back again soon with CoPR to work on future BLM projects. 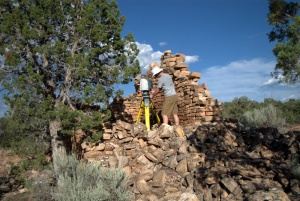 Mike Nulty of CoPR sets up the scanner in the alcove to document Saddlehorn Hamlet. 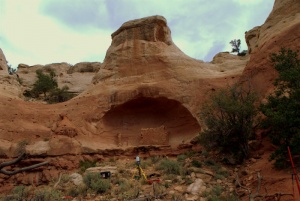 CoPR's scanner documenting the facade of the cliff face.