by Divya Jayaram
This article is written by Divya Jayaram. Divya has a Masters in Architectural Conservation from the University of Edinburgh and is currently a volunteer with CyArk.


Documentation forms the basis for any conservation project. Using traditional methods for documentation is not only time consuming but also prone to several small and large scale errors. Using technology minimizes the magnitude of these issues by providing accurate data in a shorter duration of time, while also creating a mechanism to look beyond just 'documentation'.

Recently climate change has been rapidly gaining attention in almost every field. Over the centuries, this type of phenomenon has been known to influence the existence of civilizations even in its slower, more 'natural' cycle. Yet the last few decades have seen drastic, rapid changes with incessant variations in rainfall and temperatures, rising sea waters, flash-floods, fires, hurricanes, and other disasters that are not only wreaking havoc across towns and cities, but are posing a threat to various forms of existence. The built environment, especially buildings and cities of historical importance, are particularly vulnerable to the impacts of these changes.

This prompted me to take up the topic “Impact of Climate Change on Historic Cities” as my masters dissertation for the University of Edinburgh as well as an internship project with Edinburgh World Heritage Trust (EWH). Going a step further, and in accordance to CyArk's mission of digitally preserving heritage sites at risk, one could now look into merging technology with the ongoing research to develop potential frameworks to measure the impacts of climate change on heritage cities.

Taking the World Heritage Site of Edinburgh’s Old and New Towns as a case study, the project focused on studying the physical impact as well as potential risks and vulnerabilities that are a threat to the Outstanding Universal Value of the site.

As a start, a base for analytical comparison was generated from previous studies undertaken in the historical cities of Bath, England; George Town and Malacca, Malaysia; and City of London, England. These similar studies were adapted to the Edinburgh WHS study based on meteorological data and findings. Various indicators were devised to assess the scale of potential impacts on the urban fabric, communities, and intangible heritage. The analysis of these case studies were also useful in understanding the work that is being carried to develop mitigation strategies against existing threats to the WHS’ authenticity and integrity. In tandem with the work of the local authorities, there was an attempt to initialize monitoring of the results of the measurements both at an urban scale as well as at macro levels.

The next level of the study involved risk and vulnerability assessments arising due to natural calamities as well as changes in precipitation, humidity and temperature. A study of previous and current ‘sustainability’ levels of embodied energy, natural materials, planning, and green spaces provided an insight into the adaptation of cities to the changes in climate throughout the centuries

The results of the analyses showed that the vulnerability factor of the WHS to disasters such as earthquakes, floods and other natural calamities is relatively low, although any occurrence of floods outside the World Heritage boundary would still have a direct impact. The primary effects in this case are subtle and can be seen over a longer period of time. However, parameters such as change in humidity, temperatures and precipitation could show impacts over a short period. In the context, it becomes necessary to define indicators in order to assess the overall impact of Climate on the Cultural World Heritage. This was proved by analyzing the nature of conservation projects done by EWH over the last few years. It was then mapped using different colours as indicators to generate and identify a possible pattern that could be related to the meteorological analysis.

A snippet on the project was published in the EWH’s 2011-12 Annual Review and stated, "This led to a collaboration with the Climate Change Department at the University of Edinburgh, which will hopefully continue in future years". An article on the project also made its way to the BBC. With the project playing a major role in EWH’s Sustainable Heritage Management project, it was selected as one of three World Heritage Cities to present at the Organisation of World Heritage Cities World Congress on Climate Change in Sintra, Portugal.

Scope for the future
Along with the multitudinous amounts of lateral studies across the globe, it would be an interesting move to use 3D documentation technology to preserve the many historic cities before they fall prey to the pressure of development and climate change. 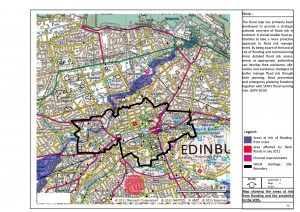 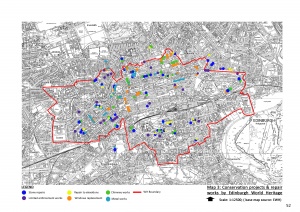