Connecting to the past in a digital environment

Conveying a sense of wonder and intimacy for the past has been both the most challenging and yet most rewarding part of my work as an archaeologist. Before recently joining CyArk, I worked as the Co-Field Director of the Catalhoyuk Research Project. The newly concluded 25-year research program led under Ian Hodder at the 9000-year old Neolithic site produced a plethora of information on the everyday lives of the original inhabitants of the site. Details, such as the connection between a geometric wall painting and a child’s burial, or that knowing that each stone, found in a cluster by the chest of a buried woman, were distinctively different in colour, were the things that always sparked wonder in me.

I believe that both archaeologists and heritage specialists have a common interest towards igniting such wonder, as we hope that public interest will aid us in preserving the past.   Archaeologists, architects, and heritage specialists have long since been venturing in the world of virtual reality. We have digitally recreated ancient cities with impeccable detail that one can fly through, villages that one can explore, or build upon and expand as a visitor. Each one of these different experiments in digital storytelling convey different aspects of the past, whether it be the development of a city or the building of an ancient Neolithic house. Often, though, the focus is on the past, which may continue to feel distant through the medium of a computer screen. The personal experience of being at an archaeological site or a monument forms a much more visceral, intimate connection between the past and the present, especially when it contains details about the past.

I surprised myself when I felt that familiar awe, a feeling that undoubtedly made me become an archaeologist, testing CyArk’s VR app, Masterworks. As I was exploring the Balcony House at Mesa Verde, I was literally able to jump on its balcony and gaze towards the valley. The detail of the timber supporting the walls in contrast to the blue skies took me aback. I felt an intimate connection to the past in a digital environment. We are still in the infant stages of this technology, which has some issues, especially surrounding its accessibility. But we are still at the beginning of this journey and our path looks promising. 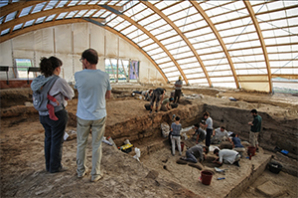