by Justin Barton
In the 1930s a great archaeological discovery was made: a group of tens of thousands of clay tablets, ranging from nugget-sized to place mat-sized, describing the daily internal life of the Persian Empire. Previous to the discovery only one such tablet had been known, and no similar discovery has been made since. The artifacts offer a unique view of the Persian Empire from within, whereas most Persian history had come from Greek, Egyptian, and biblical sources. After their discovery, over 2000 boxes were shipped to the renowned University of Chicago's Oriental Institute for research. Over the decades, several thousand artifacts have since been returned after their complete study and cataloging. Currently many more tablets are waiting to be returned, but their reunion with their homeland is now contested by a US law suit.

In September 1997 three suicide bombers attacked the Jerusalem pedestrian mall Ben Yehuda, killing 5 and severely wounding nearly 200 more individuals. Hamas took responsibility and two of its cooperatives were convicted for the crime in an Israeli court. However, two groups of injured Americans went on to sue the government of Iran for being complicit in the terrorist attack. The judge of the case ruled that Iran was liable and awarded the survivors $412 million, but he did not explain how the sum was to be recovered from the Iranian government. Years later, only a fraction has been acquired and now the US lawyer, David Strachman, has begun attempts at seizing Iranian property throughout the country, including its Cultural Heritage artifacts. So far he has sued Oriental Institute, the Field Museum of Chicago, the Harvard museum, and the Museum of Fine Arts in Boston for their collections of Persian artifacts. To date, the United States Department of Justice has denied access to the cultural heritage artifacts, but Strachman has not given up.

Many scholars, archaeologists, and Iranian-Americans are outraged at the attempt to seize and ransom cultural heritage to benefit from it selling to collectors. Strachman, however, insists that it would be inappropriate to sell these artifacts to private collectors and only wants to consider their purchase by museums for future public display. But the debate carries on, and many suspect no museum would purchase the irreplaceable, unique finds due to their contested state. The National Iranian American Council has stated that this is an attack on the heritage of all Iranian people and not a justified quest for retribution from those singularly responsible. The Societas Iranologica Europea has gone a step further and has acquired thousands of international signatures on a petition it is presenting to President Obama requesting his action to prevent the seizure of these artifacts.

Many scholars believe this could set a dangerous precedent for cultural heritage and it is not a lone cause: in 1983 241 US service men were killed in a suicide attack on Military barracks in Beirut. Iran was sued by the families and again was made accountable for $2.6 billion in reparations. The lawyer for this trial is also currently seeking seizure of the Persepolis tablets and other Iranian property and cultural heritage.

The Herald News summarized the scenario in their article with the following closing statement, "Seven decades after these ancient records arrived by ship, a very modern-day debate over terrorism now leaves them in legal limbo." 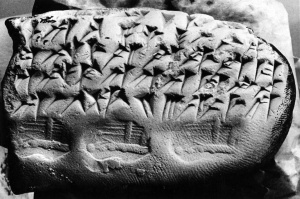