So often, you can’t appreciate the gravity of an historical event until you’ve stood on the spot. I remember learning in school about how pivotable the invasion of Normandy was to the winning of World War II, but I had never learned all the historical details and unbelievably treacherous conditions the soldiers endured to capture the beach and liberate France. I was never able to appreciate the fact that the Allied soldiers had to climb hundred foot cliffs only to then face heavily fortified German bunkers, or the length of the beach the soldiers had to run across under constant gunfire. It was these details that instilled in me an appreciation and gratitude for those who fought, conquered and died on that historical June morning.

This last month I was given the amazing opportunity to travel to Normandy, France with CyArk and The United States Military Academy at West Point to help digitally preserve three sites: the beach point of resistance known as Widerstandsnest 62, The American Normandy Cemetery, and Pointe du Hoc, all under the administration of the American Battle Monuments Commission.

Guided by the historical research of the West Point Cadets, we began our preservation on Widerstandsnest 62. The nearly quarter-mile long Omaha beach was the first site we documented. With drones, scanners and a new custom photogrammetry rig, we followed the path of General Norman Cota who coined the phrase “Rangers, lead the way!” from his ocean landing site. We worked our way landward toward the two large H669 casemates. We spent a total of two days at this location making sure we captured every aspect of the locations central to General Cota’s journey towards the liberation of France. The West Point Cadets who joined us will use the data they collected to create an application that be made available to the public for educational purposes in the spring.

The American Normandy Cemetery was our next stop. We took a break from documenting the site to watch and record a laying of the wreath ceremony by the West Point Cadets at the Map room of the Cemetery. It was a very somber and moving ceremony; a fitting tribute to the lives commemorated at the Cemetery.

Pointe du Hoc was our final stop in France. From the top of hundred-foot cliffs we documented the casemate, anti-air, and look-out bunkers between Omaha and Utah Beach. During our documentation, there was a moment when the realization of what had truly occurred here overwhelmed us all. Only looking down from above can you understand the magnitude of their task. Soldiers had climbed up these cliffs, hand-over-hand, while being shot at, only to then face the heavily fortified German bunkers. We were told that out of the 270 soldiers who took part in the invasion at this site, only 90 survived and only 10 were uninjured. The statistics were staggering, and the odds stacked against the Allies made the victory only more historic.

For all of these sites I was in charge of Aerial Photogrammetry. Using the DJI Phantom 4 Pro drone I would take pictures of higher hard to reach areas on the map room and chapel of the American Normandy Cemetery. I would use the drone to capture low altitude shots of the bunkers and surrounding areas at WN62 and Pointe du Hoc. After the 6 days we were there I had taken nearly 40,000 photos out of the over 100,000 photos taken on the trip. With everything organized and put onto hard drives, we had collected a cumulative total of nearly 2 terabytes of data.

No matter the cold conditions or long hours we worked, I enjoyed every moment of this expedition. The opportunity to experience such a critical site, to use cutting-edge technology to preserve its valuable details and feel the importance and reverence the locals had for its role in history is something I will value for a lifetime.

This project was made possible through the support of Jim Morris, a Seagate executive and West Point alumni. 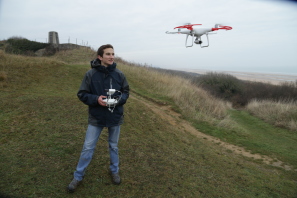 We conducted flights for 7 hours or more a day over the course of the project, here at WN62. 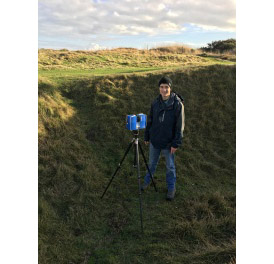 Standing within a massive crater at Point du Hoc. 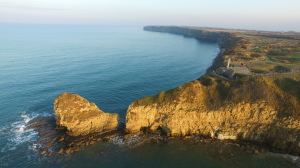 Pointe du Hoc in the Sunrise.