A new sustaining partnership for the CyArk 500

by Katia Chaterji
CyArk announced a new partnership with Iron Mountain on October 7th at its Annual Summit, held at the National Archives in Washington, DC. This event marked the one-year anniversary of the CyArk 500 Challenge, and provided a promising opportunity to announce the new five-year partnership with Iron Mountain, Inc., an enterprise information management services company headquartered in Boston, Massachusetts. This commitment, in the form of technology services and a cash donation, underscores the shared mission of both organizations to preserve our cultural heritage for future generations by supporting projects around the world and archiving and storing the data generated through the CyArk 500 in Iron Mountain's premier archive.

To kick off this collaborative new relationship, CyArk and Iron Mountain together digitally preserved one of the most iconic sites in Washington, DC, and arguably in America: The Washington Monument. The effort to preserve this site was a significant undertaking, shared between CyArk, the National Park Service, and Iron Mountain. Originally constructed from 1848-1854 and 1876-1884, the Washington Monument was the tallest building in the world at the time of its completion, standing at 555 feet, 5-1/8 inches. The obelisk is constructed of marble, and its interior walls are lined with commemorative stones from individuals, civic groups, cities, states, and entire countries that wanted to honor the memory of George Washington, the once commander-in-chief of the early Continental Army and the first president of the United States.

The 3D data of the Washington Monument is now available on the CyArk website, including a detailed 3D model of the obelisk and rare glimpses of the monument’s interior. The Washington Monument was also recognized at the CyArk Annual Summit as one of the newly added sites to the CyArk 500 Challenge, joining ranks with sites such as Rapa Nui in Chile, Chichen Itza in Mexico, and the Tower of London in the United Kingdom. CyArk and Iron Mountain look forward to future projects together in support of the CyArk 500 Challenge! 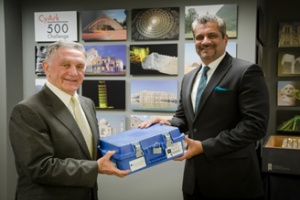 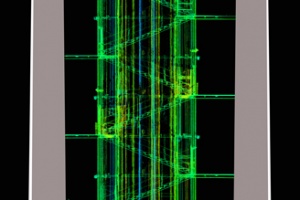 This 3D perspective image shows a detailed view of the interior of the Washington Monument, laser scanned as the pilot project of Iron Mountain and CyArk’s five-year partnership. 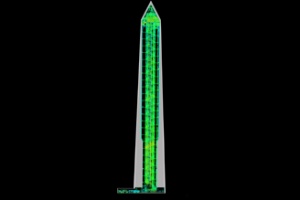 This 3D perspective image shows a rare view of the interior staircase within the Washington Monument.