by Dan Walsh
CyArk and partners Historic Scotland and Glasgow School of Art were featured in a New York Times article entitled Scots Aim Lasers at Landmarks, written by Michael Kimmelman. The article discusses the Mount Rushmore project, and also expounds on the Rosslyn Chapel and Stirling Castle projects.

"EDINBURGH — Come April a small team of experts from the Glasgow School of Art and the government heritage entity Historic Scotland will fly to South Dakota at the behest of an organization called CyArk and the United States National Park Service. They will make laser scans and computer models of Mount Rushmore.

Aside from the wee bit of Scottish blood in three of the four enshrined presidents (Lincoln’s the odd man out, in case you’re wondering), there is of course nothing whatsoever Scottish about this most all-American of sites. But cultural expertise transcends national borders. The Scottish team of four or five will spend a few days setting up and moving around their various scanners to capture all of Mount Rushmore’s nooks and crannies, collecting billions of bits of digital information, which will then be brought back here, to be crunched and sorted out by computer." More... 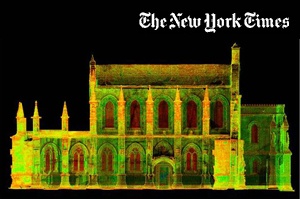