by Taline Ayanyan
CyArk and partners are extremely excited to announce the launch of the Hopi Petroglyph Sites Digital Preservation Project Website.

This special Hopi portal on the CyArk website will allow a new generation of Native American youth to learn about and share the legacy of their ancestors. The realization of the Digital Preservation Project includes the documentation of sacred Hopi sites through state-of-the-art 3D capture technology and the use of the data captured to create online interactive and educational multimedia freely available to the public. The 3D models and virtual tours captured at Tutuveni and Dawa Park in Arizona provide the basis for this rich interactive web portal, but they also represent a permanent and highly-accurate 3D digital archive of the sites and the petroglyphs contained within. With the increasing vandalism and deterioration occurring at these sacred Hopi Sites, it is more important than ever to document what exists and educate the public about its importance, not only for members of the Hopi tribe, but for all of us who stand to learn a great deal about the diverse history of the Native American people.

The main focus of the project is Tutuveni, a petroglyph site sacred to the Hopi people and is located on Navajo Nation land. Tutuveni means “newspaper rock” and was included on the 2008 World Monuments Fund Watch List in the company of Machu Pichu in Peru and the Bamiyan Valley in Afghanistan where two monumental Buddhas once stood. With support from WMF and Arizona Public Services, Hopi crews recently fenced off the site and installed security cameras. With the leadership of CyArk, laser-scanning crews also digitally documented the site.

This monumental project is the result of collaboration between important tribe representatives and heritage organizations. With the support of World Monuments Fund (WMF), a New York-based non-profit dedicated to preserving cultural heritage sites across the globe, the Hopi Petroglyph Sites Digital Preservation Project was led by CyArk. Working with the Hopi Cultural Preservation Office, Dr. Wesley Bernardini of the University of Redlands, and representatives of the Navajo Nation, CyArk was able to digitally capture two sacred Hopi sites and use the data collected to build out a special web portal to share the legacy of the Hopi as told through Tutuveni and Dawa Park. This web portal was officially launched on December 16, 2011, allowing free public access to all materials created through this important collaboration.

Here is a quick guide to the wealth of information that has been created as a part of the digital preservation project and included on the CyArk portal for free access by the public:

CyArk would like to invite all of our readers to explore the rich content within the Hopi Petroglyph Sites web portal.

See below under "Related Documents" for a PDF of the official Press Release. 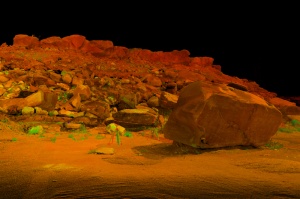 Photo of terrestrial LiDAR field capture by the CyArk team at Tutuveni. Justin Barton of CyArk works on scanning the various faces of Boulder 48 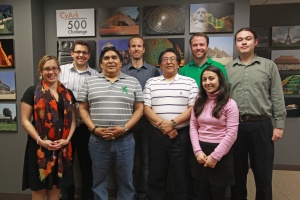 Group photo from the educational workshop held at the CyArk offices in Oakland, California. Participants included, from left to right: Kristina Sturm and Scott Lee of CyArk, Lee Wayne Lomayestewa of the Hopi Cultural Preservation Office, Professor Wes Bernardini of the University of Redlands, Patrick Secakuku of the Hopi Junior/Senior High School, and Landon Silla, Taline Ayanyan, and Myasha Nicholas of CyArk