CyArk and the Scottish Ten at the Eastern Qing Tombs

by Elizabeth Lee
This week marks the close of fieldwork at the Eastern Qing Tombs in China. The project is the third international project of the Scottish Ten, following Mount Rushmore in the United States and Rani Ki Vav in India. The international team has spent almost 4 weeks documenting the imperial mausoleum complex of the Qing Dynasty, located in Zunhua, 125 kilometers northeast of Beijing. The project is occurring in collaboration with the Cultural Relics Department at the Eastern Qing Tombs and the State Administration of Cultural Heritage (SACH). The capture team of Historic Scotland, the Glasgow School of Art, and CyArk is utilizing terrestrial laser scanners as well as a mobile mapping system from Topcon.

To read about the first week of the project, check out Scottish Ten Project Manager Dr. Lyn Wilson's blog.

CyArk's own Justin Barton joined the team to assist in data management and processing. With multiple scanners running at the same time, this task has been essential in all the Scottish Ten projects. In their time on site the team has collected over 1,000 scans totaling almost 1 terabyte of data!

As the team wraps up their final days at the tombs, we look forward to seeing the results of this first CyArk project in China!

For more images of the fieldwork and feedback from the team, be sure to visit the Scottish Ten Twitter page. 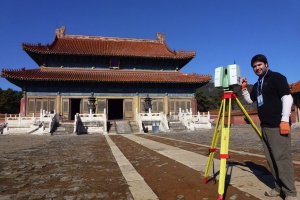 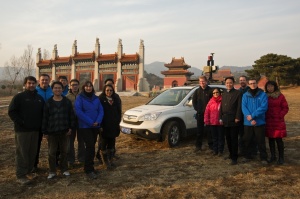 Team photo with the Topcon system. Image courtesy of CDDV