by Jaime Pursuit
SAN FRANCISCO, California, November 19, 2012 – CyArk and Zynga.org have teamed up to preserve our cultural heritage sites -- the tangible representations of humanity’s shared past. Players of Zynga’s popular Hidden Chronicles game can now support CyArk’s digital preservation projects on Mayan sites in Mexico and Central America, as well as other heritage sites around the world by participating in a new Zynga.org in-game promotion.

Founded by technology entrepreneurs Ben and Barbara Kacyra, CyArk is a nonprofit that uses 3D scanning and other new technologies to digitally preserve cultural heritage sites in archival detail and share the sites with the world. Zynga.org is the social impact arm of Zynga (NASDAQ: ZNGA), the world’s leading provider of social game services. To date, Zynga.org has raised over $13 million for nonprofit partners.

Beginning November 19th, travelers will have three months to visit Chichen Itza and unlock limited edition scenes at El Caracol, and El Castillo, each for purchase in Hidden Chronicles, Zynga’s first hidden object game. Data captured by CyArk’s laser scanners were used to develop the beautiful scenes of El Caracol and El Castillo. 100 percent of the purchase price for the limited edition scenes will go directly to CyArk, which will use the funds for additional digital preservation of ancient Mayan civilizations.

“We are delighted to have this partnership. It speaks so highly of Zynga.org that they care about digitally preserving world heritage for our children and grandchildren” said Ben Kacyra of CyArk, who is featured as a non-player character in Hidden Chronicles.

“Zynga.org is committed to helping address global problems and raise awareness through social gaming,” said Ken Weber, Executive Director, Zynga.org. “In our first campaign with CyArk, we are thrilled to use their beautiful content to raise funds and awareness of world heritage preservation as a major social cause.”

Hidden Chronicles is available for free on Facebook and on www.zynga.com at http://company.zynga.com/games/hidden-chronicles

To learn more about CyArk or to donate to Mayan heritage preservation, please visit archive.cyark.org/zynga or contact Jaime Pursuit 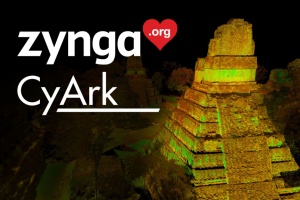 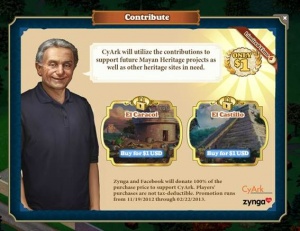