by Dan Walsh
In October 2008, Archaeology Magazine's Deputy Editor Eric Powell accompanied the CyArk team to digitally preserve the Zapotec ruins of Monte Alban, just outside Oaxaca, Mexico. Archaeology Magazine had wanted to write an article on CyArk for some time, and the Monte Alban project proved to be the perfect opportunity. From dodging lightning to scaling cliffs with laser scanner-in-tow, the resulting adventures became the 6-page, featured cover story in the current (May/June 2009) issue of Archaeology Magazine.

The article, entitled "The Past in High-Def" does a great job expounding upon the benefits of digital heritage preservation to site authorities, and even gives a sneak peak at our upcoming Rapa Nui (Easter Island) project. It can be read in its entirety at www.Archaeology.org. 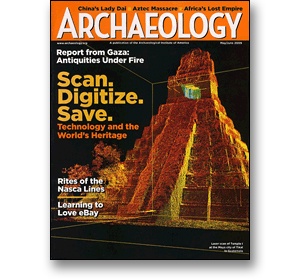 CyArk on the cover of Archaeology Magazine