by Elizabeth Lee
Last week I had the honor of representing CyArk at the ATHENA project kick-off meeting in Amman Jordan. I only spent three days in the country but I had a wonderful experience meeting new partners and exploring some of the heritage sites. The Ancient Theaters Enhancement for New Actualities, ATHENA, project is a multi-year collaborative effort between 5 major Mediterranean partners and several other associate partners. The ATHENA project is part of Euromed Heritage 4, a program that "contributes to mutual understanding and dialogue between cultures through the Mediterranean region by the valorisation of cultural heritage."

I joined partners from Tunisia, Algeria, Spain, Italy and Jordan for the two-day kick-off meeting. This meeting marked the first opportunity to bring together all partners and associate partners to discuss the 36 month collaborative project. The project will focus on ancient theaters throughout the region and aims to "achieve a suitable level of knowledge regarding the tangible and intangible aspects of the sites involved. It will also outline a sustainability strategy for these theatres and set up management plans." One portion of this plan is the digital preservation of these monuments through the use of laser scanning and other technologies. The meeting was held jointly in English and Arabic and simultaneous translations were provided via a small ear piece. It was a terrific experience and I was very impressed with not only the scale of the project but also the diversity of partners involved.

At the conclusion of the second day we were treated to a special trip to Jerash to see the ruins of the Greco-Roman city Gerasa. The site is truly impressive in its size, preservation, and beauty. It is considered to be one of the most important and best preserved Roman cities in the Near East. The site boasts two amphitheaters and an enormous oval forum. I received the biggest surprise when, upon entering the larger of the two theaters, we were greeted by the sound of bagpipes of all things. I never got an explanation for the choice of musical instruments but it was really fun to see the theater with modern performers and experience the acoustics of the environment. We probably could have spent several more hours exploring the site but the time we spent was fantastic. We even lucked out in visiting the site on a perfect afternoon and were treated to blue skies and plenty of spring flowers. I left the site with an even greater appreciation of Jordan's heritage and an excitement about the potential to include sites like Jerash in the ATHENA project. 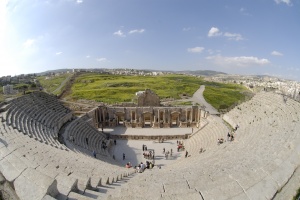 The Larger Amphiteater in Jerash, Jordan 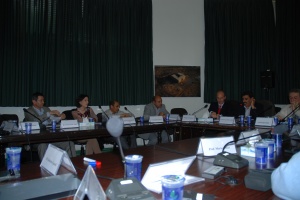 A Portion of the ATHENA Project Meeting 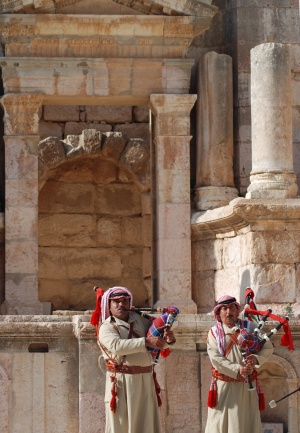 Bagpipes in the Theater