CyArk recently held a two and a half day workshop in our offices here in Oakland. The objectives for the workshop were to create lesson plans for high school age children and a web-based educational activity for children, all using the content CyArk has created for the Digital Preservation Project at the San Antonio Missions. The educational material created in our workshop was designed to be utilized in local San Antonio high schools and to be available on the home page for the San Antonio Missions on CyArk's website for the benefit of Children all over the world.

Daisy Medina of Highlands High School and Christopher Castillo of NPS traveled out to California from San Antonio to attend our workshop. Both Daisy and Christopher had reviewed CyArk's private website for the San Antonio Missions and came prepared for the workshop with ideas to share. Their enthusiasm and expertise were essential in making the workshop a great success.

Over the two and a half day workshop, Daisy, Christopher, and I had a very productive brainstorming sessions in which we developed educational lesson plans that will be utilized in a variety of high school level subjects. Thanks to the expertise of Mrs. Medina, the lesson plans created comply with the requirements put forth by the Texas public education system, Texas Essential Knowledge and Skills (TEKS). We created two full lesson plan packages and three lesson plan summaries. These materials will be released for use when the San Antonio Missions’ project goes live on CyArk’s website.

We accomplished quite a lot in only two and a half days! CyArk's Manager of Software Development, Landon Silla, also participated in the brainstorming sessions of the workshop, and has since developed the web-based activity in-house here at CyArk. We are very excited about this web-based activity, which is already serving as a prototype for web-based activities we are developing for other projects. This activity will also be available within the San Antonio Missions’ project on CyArk’s website for children all over the world to explore.

Stay tuned for more updates on the launch of the San Antonio Missions Digital Preservation Project as well as the development of more fun and interactive educational activities! 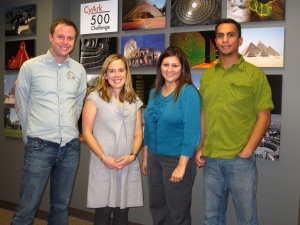 From left to right: Landon Silla of CyArk, Kristina Sturm of CyArk, Daisy Medina of Highlands High School, and Christopher Castillo of NPS 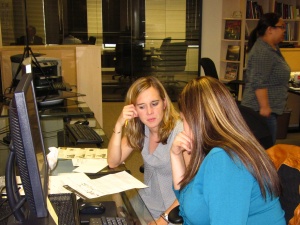