In the face of destruction, the public gains a voice

by Katia Chaterji
In February 2015, the world was shocked by the horrific videos released by the Islamic State showing the violent destruction of statues and other artifacts held within the Mosul Museum in northern Iraq. These actions echoed previous destruction throughout the region conducted by extremist groups and were condemned by UNESCO Director-General Irina Bokova as “a deliberate attack against Iraq’s millennial history and culture, and as an inflammatory incitement to violence and hatred.” In response, Director-General Bokova called an emergency meeting of the United Nations Security Council on the protection of Iraq’s cultural heritage. The global heritage community, including the International Council on Monuments and Sites (ICOMOS), refuses to remain silent in the face of such unjustified violence.

Spurred by this global call to action, Project Mosul was founded as a collaborative project to empower the public to participate in the cultural preservation and digital restoration of Mosul’s lost treasures. As digital cultural preservationists, the work of Project Mosul is particularly close to heart for all of us at CyArk, and especially to our Founder Ben Kacyra, who was born in Mosul. Despite the tragic events that have preceded, we are very pleased to announce our recent partnership with Project Mosul to assist and participate in their endeavors via any means possible. We are honored to lend our expertise and hope that this tragedy can help to lay a foundation for broader acceptance of Digital Preservation around the world.

Project Mosul was developed by the “Initial Training Network for Digital Cultural Heritage” (ITN-DCH), the first and one of the largest Marie Curie fellowship projects in the domain of digital cultural heritage. Working in ten different European countries, a main focus of the ITN-DCH network of young heritage professionals is the use of 3D objects for heritage management and conservation. Building upon ITN-DCH technical training, the core team of Project Mosul strives to respond quickly to the on-going cultural loss by building a web platform and masking software to create 3D virtual reconstructions of the destroyed artifacts from photographs. Joined by volunteers from around the world, the Project Mosul team proposes to use crowd-sourced images to virtually recreate artifacts as 3D objects using the latest in photogrammetry techniques. The 3D representations will then be presented in an online museum and the data will become freely accessible to the public. In actualizing this ambitious endeavor, Project Mosul is engaging a number of organizations, including the local management of the Mosul Museum, EU’s 4D-Ch-World, and the digital library EUROPEANA.

There is no question that 3D reconstructions will never replace the original objects; however, in the face of rampant destruction, these visualizations are a first step in ensuring that the memory of these objects and their cultural significance remain alive. The current political climate of the Islamic State has led to not only endorsed destruction of such indispensable cultural heritage, but also the looting and black market sales of countless artifacts. An online, 3D museum displaying these artifacts may initially assist in the identification of stolen objects and aid the ongoing work of scholars and researchers of this region.

Instead of lingering on the negative impacts of global atrocities, Project Mosul focuses on distributing a message of hope. By working together, as the public and for the public, it is possible to preserve and protect our shared cultural heritage, memory, and legacy. This commitment returns a sense of agency to the public, and fosters a motivated international community to continue these important discussions and allow valuable material culture to be available for future generations.

CyArk is extremely proud to announce its partnership with Project Mosul this month. By assisting in public outreach and data processing, CyArk supports Project Mosul’s incredible efforts to engage a wide community for a common cause. If you are interested in finding out ways to volunteer or get involved in Project Mosul, please visit their website or follow them on Twitter (@projectmosul). 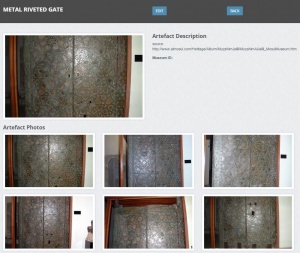 Project Mosul's website compiles crowd-sourced photographs of artifacts now threatened or destroyed, as displayed in this photo gallery of a metal riveted gate, in order to virtually recreate them. 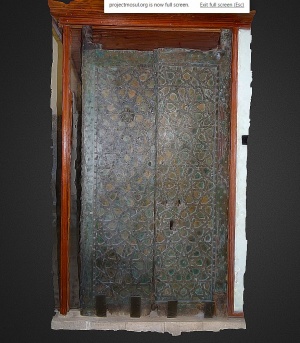