by Elizabeth Lee
Last week I traveled to Amman, Jordan to give a paper at the Digital Media Applications in Cultural Heritage (DMACH) conference. DMACH 2008 was hosted by the Center for Study of Architecture in the Arab Region (CSAAR), and held jointly with their annual CSAAR conference. The conference attendees were incredibly diverse in both research topics and geographic representation. The four-day joint conference began with an opening ceremony presided over by Prince Sultan bin Salman. The whole conference was a very engaging experience and it was great to speak with so many different people who are working in digital heritage. Wednesday night the conference attendees were treated to a night out in Amman by the mayor of the city. We enjoyed traditional food and even live music and dancing.

Thursday morning I gave my paper about CyArk's Digital Preservation process. It was a great to present at a venue where almost all the attendees were unfamiliar with CyArk. I had the opportunity to meet many potential university partners and exchange ideas with experts on a variety of digital technologies.

I stayed an extra day to take a trip down to see the country's most famous heritage site, Petra. Most people are familiar with the site from its dramatic appearance in Indiana Jones and the Last Crusade. It definitely lived up to its reputation and I had an incredible day touring the former Nabataean city. The scale of the site is incredible and I could imagine it as a bustling city full of trading caravans. It was easy to see why it has been inscribed as both a UNESCO World Heritage Site and one of the New Seven Wonders of the World. 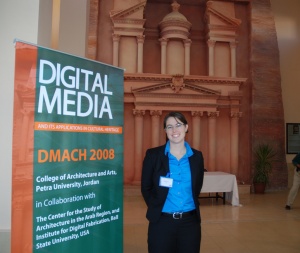 The DMACH conference at Petra University

Dinner and Dancing hosted by the mayor of Amman 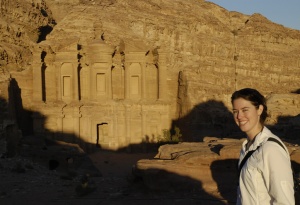 In front of the Monastery in Petra