For the first time since its incorporation CyArk was excited to host its annual summit, right here in the Bay Area. In years past, CyArk hosted the summit in regions of historical and cultural significance such as London, Washington DC and Berlin. This year CyArk embraced supporters, partners, educators and technologists in the Bay Area, in order to inspire thoughtful discussion and pioneer the future of immersive education.

During the Immersive Education Symposium, excitement around CyArk and the activation of VR for education was evident. Participants representing some of the most influential organizations - Oculus, HTC, Facebook, and Google - were eager to learn more about CyArk’s application of LiDAR and photogrammetry to create engaging VR experiences. Even some of most notable education institutes - Stanford, Berkeley and San Francisco State - joined us to see the intersection of high-end VR technology when paired with CyArk’s demos of Bagan, Mount Rushmore, Corinth and the Brandenburg Gate.  Even those that have visited these places before seemed to have a visceral reaction to experiencing them in VR.

While CyArk’s VR demonstrations had people lingering before and after the event, it was the expert panel that led a transparent conversation about what tech developers and educators face when trying to advocate for, and integrate this disruptive technology. Panel highlights included teacher training, accessibility and scale of the technology, as well as VR for activism, leaving participants hungry for continued discussion and networking following the panel’s conclusion.

Paul Turnbull, President of Mid Pacific Institute, kicked-off the discussion with some insightful thoughts, “The industry is looking for leaders who can offer a more dynamic learning experience and pull the curiosity out of students. For educators, technology remains a tool. If the content is good and you can enable students to engage and connect dots to their existing learning patterns, it becomes a beautiful learning experience.”

Shauna Heller, who comes from Oculus and is now owner of well known consulting firm, Clay Park VR, kept panelist on there toes by addressing obvious challenges. She began the discussion with an update on hardware. As the industry strives to better understand VR, Chris Chin event panelist and Head of VR Content with HTC, reminded us that we are still in the early stages of VR.  Even though we’ve seen multiple versions of the headsets, there is a lot of maturation yet to happen with VR in general. This means CyArk is on the forefront of collaborating with VR technologies, producers, educators and advocates. This event showcased CyArk’s leadership to provide a forum to discuss the very undefined future of immersive education.

"When we talk about 21st century learning, it’s not just about teaching students in a different way, it’s about allowing them to exit the classroom walls and really engage with the world. The best part about CyArk’s content is that it’s relevant for all ages and education levels” said Phil Kim, panelist and Head of Innovation for KIPP Foundation. 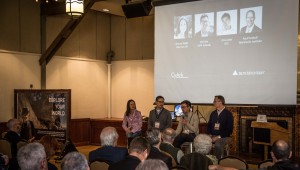 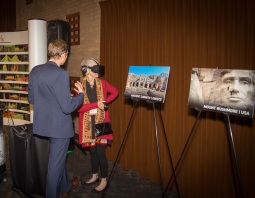 A CyArk supporter Explores Her World in VR

CyArk Supporters gather for a reception at the Stanford Faculty Club