CyArk traveled to Bangladesh in April 2019 to document the UNESCO World Heritage Site of Bagerhat in Southern Bangladesh. Historically known as Khalifitabad, the ancient city was founded in the 15th Century by the revered muslim saint Khan Jahan who oversaw the construction of many finely made brick structures including many mosques. The site was chosen due to the risks it faces from Climate change impacts, mainly related to saltwater intrusion and the resulting efflorescence. Efflorescence is a phenomenon that occurs when salt water travels through porous building materials resulting in the degradation of these materials. In Bagerhat many of the monuments are built at or near sea level and as global sea level rise the conditions on site are expected to worsen.

CyArk documented three of the monuments in Bagerhat; the Sixty dome or Shait-Gumbad Masjid, the nine dome mosque and the Chunakhola mosque. The data collected will serve as an accurate point in time record of the monuments and we hope it will also allow conservators to quantify and better understand the efflorescence processes going on at the site.

As well as documenting the three mosques CyArk presented initial results from the documentation in a workshop along with the Department of Archaeology of Bangladesh, Khulna Division the ICOMOS Climate Change working group and several universities. Discussions focused on the Outstanding Universal Value of the site as well as the management decisions that need to be made in the face of climate impacts. 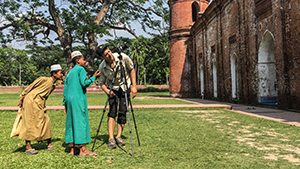