In early January, the CyArk team braved the desert winter and throngs of techies to attend CES 2017 alongside our partners at Seagate.

Over the course of three days, CyArk took part in the Seagate Experience Zone at Caesar's Palace, Las Vegas, to support Seagate's notion of "Data at rest is storage. Data in flight is experience."

Seagate guests were treated to an incredible array of data-creators and data-driven experiences. From CyArk's own data-centered immersive site experiences, to the latest and greatest DJI drones, professional gamers and creative professionals, big data was on full display.

Seagate's content-driven approach was a breath of fresh air at CES where hardware has always reigned supreme. When CyArk attended SXSW with Seagate last March, the trend towards personal VR was apparent, but its still seemed a year or more away from being incorporated into CyArk's work to share culture with the world.

in the nine months that have elapsed since then, we have seen an surprisingly quick clip for development of VR, with wireless and 4k headsets due to launch in the coming months. Even more importantly, non-gaming content such as CyArk's has helped to re-imagines and democratize the audience for VR.

VR is no longer niche.

From libraries, to schools to nursing homes, the audience for VR may surprise you. It certainly surprised visitors to the CyArk booth who were taken around the world to some of the amazing sites with CyArk's archive. "It was beyond being there," one participant said.

The enthusiasm and excitement of all who stopped by was such a pleasure to watch. Within the last nine months, we at CyArk have started to take for granted how amazing and transportation the experiences can be. But for those who have not seen a CyArk VR environment, whether a first time user of VR, or an old pro, the reaction is always the same, "Wow, I had no idea what this site was like." We are honored to be able to share the experience of travel with people regardless of circumstance and are eagerly anticipating all that is to come in 2017.

CyArk would like to thank the team at Seagate for the invitation to take part in CES this year and for their continued support of the CyArk mission. 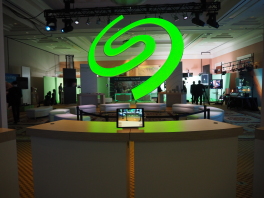