by Justin Barton
The Eastern Qing Tombs is made up of 15 separate tomb complexes for emperors, emperoresses, and emperial concubines. The third international Scottish Ten project focused on just two of these tombs, but their digital preservation was no small task:

To digitally record a site of this size, the voluminous amounts of data were gathered from a plethora of equipment. This included three Leica C10s, one Leica HDS6000, an Artec MHT, four Nikon D3Xs', one Nikon D300, one Nikon D80, and an iStar. And for two days, Topcon China used their IP-S2 system to map the landscape of the two tombs. At the beginning of the fourth week, with four days left of field capture, 1.75TB have raw data has already been accumulated.

Per usual, one of my roles as CyArk's support of the S10 project is to help with data management. Although this time, I also spent more time than previous projects helping with the data capture--again, because of the sheer scope to be covered. But after 5 days of scanning and photography, I moved into the data. An avalanch nearly buried me in 1s and 0s spread out across 5 hard drives, 5 laptops, countless compact flash cards, and half a dozen micro USB sticks.

In order to not only manage data capture, but data processing, each tomb was divided into multiple sub-areas, corresponding geographically and physically to the layout of the tombs--from Area A at the entrance gates and towers to the Area H at the Xioling Tomb and Area F at the Jingling Tomb, both representing the deepest, most access-restricted locations: the complex comprised of the burial mound, underground palace, and memorial tower; the final resting places of these two Emperors of China.

This allowed for consistent data dumps into appropriate folders and segmentation of registrations in Cyclone of scans into corresponding areas. Each night, after field work, all scan and photo data was copied to working drives for each. Each night these working drives were then backed up to the Total Site Backup Drive. This backup drive was then triplicated every other night to two additional back up drives. Hard drives fail. And with a month of data collection represented as terabytes of raw data, we are not taking any chances.

Additionally, I am registering data on-site as the team scans per our usual methodology. Data coverage and accuracy is being reviewed in the process and we are keeping a running list of any areas that may require additional scans or rescanning due to data problems. Fortunately, there have been no major issues with data accuracy and with 4 scanners being operated at all times, the data coverage is superb, with excellent attention to detail such as the high, sloping roofs of the towers being captured from the surrounding hills/mounds, and intricate detailed inscriptions of the stela being bombarded with laser scanners and then photogrammetrically documented as well. At the end of the this week, Topcon China will also be handing over the wider landscape data captured by their mobile system; allowing the subareas captured by the terrestrial machines to be compiled together within a much wider context.

I'm fortunate to be working with a world-class team and so data management--although a vast amount of data--is relatively streamlined. The biggest issue currently for me as I register and backup is keeping my fingers from going numb in this frigged "office", which is one of the tomb ancillary structures. The Chinese site team has outfitted it with desks, chairs, and temporary electricity. Oh, and one small space heater; it sits right next to me. 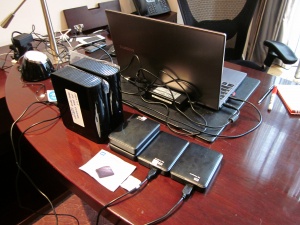 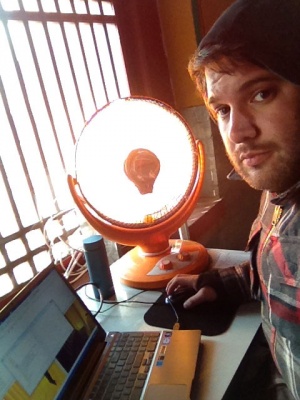 Justin tries to stay warm in this frigid office.