An update on the exciting week at the Digital Documentation conference in Glasgow, Scotland

by Elizabeth Lee
Last week marked the always exciting Digital Documentation conference in Glasgow, Scotland. This was the third year of the conference, now shortened to Digidoc, and was truly the best conference yet. CyArk has been very proud to partner and participate in the conference since inception with the key organizing partners Historic Scotland and the Glasgow School of Art.

The organizers did a fantastic job in recruiting interesting speakers for the event as well as creating a unique atmosphere for collaboration and exchange. To top everything off, the conference was officially opened by Scottish First Minister Alex Salmond. Mr. Salmond's presence reinforced the Scottish government's commitment to the digital preservation of their cultural heritage. He spoke passionately about the opportunities for new technologies to tell the stories from our history and engage a new generation in their cultural heritage. The First Minister also announced the next site in the Scottish Ten, Eastern Qing Tombs in China. It was an honor to meet with the First Minister and we are continually grateful for our partnership on the Scottish Ten and beyond.

Although the conference formally began with the First Minister's opening on Wednesday, the day prior all the speakers gathered in an informal round table. This was a great opportunity to discuss the field of 3D documentation and where it is headed. Douglas Pritchard of the Glasgow School of Art lead the discussion that covered everything from where the field will be in 5 years, to what types of technology integration might be possible today.

The conference itself was a great learning experience. Over the two days of talks, speakers covered everything from 3D laser scanning to emerging technologies including, crowdsourced photogrammetry, 3D sound, augmented reality, and mobile apps. It was a fresh take on this type of conference, covering not only specific technologies, but the wide variety of possible applications.

I would like to thank all those involved in making it a great few days. We look forward to next year. 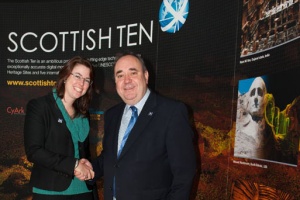 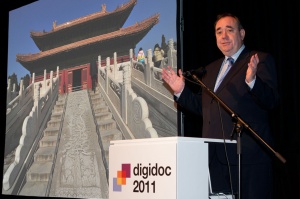