Digital Preservation at the Brandenburg Gate

by Chance Coughenour
Architecture shapes our world, sometimes more than we comprehend. Fences and walls are built for protection and security. Doors and gates, however, restrict access to the other side when closed. Although usually with a vernacular purpose, these forms of architecture are at times constructed with a symbolic intention and it is important to recognize why.

The Brandenburg Gate in Berlin was constructed as a symbol of peace in the late 18th century. However, historic events transpired which brought its image and survival into jeopardy. Napoleon once stole the entire Quadriga statue from the top of the Gate as a war trophy. Initially conceived of as Eirene, the Roman goddess of Peace, that statue was reinterpreted as Victoria the goddess of victory upon Napoleon’s eventual demise in 1814 and return of the Quadriga.

Likewise, internal governments have also leveraged the Gate’s political significance and iconic nature. One of Hitler’s first propaganda events was his torchlight procession through the Gate to the presidential palace. Though heavily damaged during World War II, the Gate survived. In 1961, upon construction of the Berlin wall, the Gate was again barred to public visitors from both East and West, mirroring the divided identity of the German people thus blocking not only its real function as a gate between parts of the city but also its symbolic function as a symbol of German unity, peace and victory. Since 1989, the Gate has once again been restored to a tangible and emblematic landmark of peace.

Last month, I had the opportunity to participate in a documentation acquisition project carried out between CyArk and the Institute for Photogrammetry at the University of Stuttgart in southern Germany. With the support of the institute’s director, Prof. Dieter Fritsch, two of his cultural heritage researchers, including myself, came on-site with the necessary equipment to complete an integrated terrestrial laser scanning and photogrammetry campaign. In three short days, while large tourist groups passed around us with puzzled looks, we completed our documentation. Following the processing of the collected data, we will produce a high resolution 3D model of this important monument and present it at the upcoming CyArk Annual Summit in Berlin in late October.

The significance of recording cultural heritage for means of conservation, education, and public dissemination is a crucial objective of a growing number of organizations and projects around the world. As we witness the contemporaneous destruction of cultural heritage in areas of human conflict and natural disaster, the story of the Brandenburg gate reminds us of why these sites are so important to preserve for both the present and future generations. 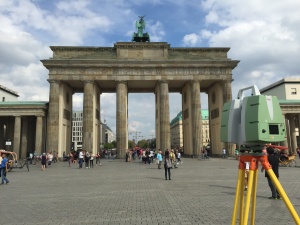 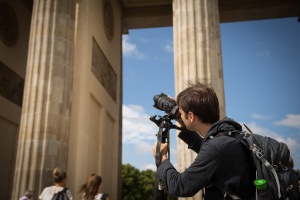 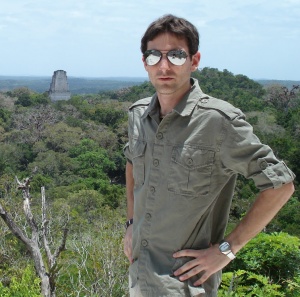