by Scott Lee
Earlier this year the CyArk team traveled to Rhode Island to digitally preserve the Marble House— one of the famous Newport Mansions built as a “summer cottage” during the late 1800’s. The home, built for William Vanderbilt and his wife Alva, contains a space, hailed as the Gothic Room, which was designed specifically to hold the couples’ Medieval and Renaissance art collection.

Through a generous grant from the Kress Foundation and through the support of the Preservation Society of Newport County and the John and Mable Ringling Museum of Art, the Marble House is serving as a pilot project for digital repatriation. The primary objective of the project is to digitally bring the Gavet Collection, now housed in the Ringling Museum of Art in Florida, back into its original context within the Marble House Gothic Room. The project was conceived of during the successful “Gothic Art in the Gilded Age” exhibition in which the collection was physically returned to the space. The idea is that the digital repatriation of the collection will allow visitors to experience the Gavet Collection in its original context, whether they are at the Marble House, Ringling Museum, or even online.

The project got started in April, on a gloomy Tuesday morning with our partners Grady Consulting. We began by scanning the Gothic Room. The room has very intricate plaster carving and had to be scanned at a high resolution of 2-3mm. In all, we did nine scans of the room and captured over a ½ billion data points. After doing the first set of scans of the room we started on the exterior and due to inclement weather, scanning was cut short. The same process, including the bad weather, occurred the next day as well. During our down time, John Tschirch, the Director of Museum Affairs, and Paul Miller, the Curator, generously showed us some of the other splendid homes that the Preservation Society of Newport County oversees.

Upon our return we dove directly into processing the data so that CyArk's Director of Projects and Development, Elizabeth Lee could present the initial results at the Newport Symposium in May. The below animation caused such excitement at the Symposium that we wanted to share it with a wider audience.

We hope you enjoyed the sneak preview of the Marble House and look forward to launching the project on CyArk. 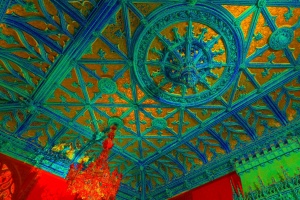 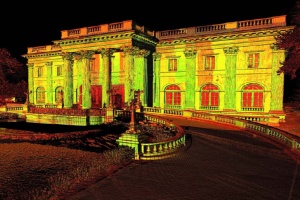 Initial scan results of the exterior of the Marble House 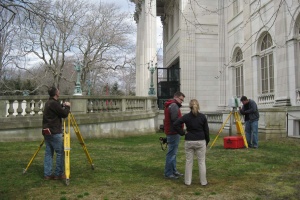 The CyArk team capturing the exterior of the Marble House