Makenna Murray, Development Officer: Hey Scott! You’ve been taking some exciting trips this year with CyArk. Can you tell us a little bit more about your most recent field work in Bagan?

Scott Lee, Director of Programs: Absolutely! Last month I was fortunate enough to travel to Bagan, in Myanmar, with a CyArk Field Team to head up the field work there and assist in a training two groups of students, one from Canada and the other from Myanmar. It was one of the most amazing experiences I have had while at CyArk.

MM: Wow! That is quite an endorsement. What made this project so special?

SL: There were a number of things that contributed to this being a fantastic project. The project was generously sponsored by one of our Board Members, John Ristevski who not only made a contribution to CyArk, but volunteered to work the whole trip alongside two other volunteers (and former CyArk employees) Anthony Fassero and Oliver Monson. We had a great team with a brain trust from the original CyArk days, and it was fun to get these old guys back in the field. We also had a chance to work with students from both Carleton University up in Ottawa and Yangon Technical University in Myanmar who were all really eager to learn and participate on site. On top of that, Bagan is truly a world wonder—it’s amazing. To see the breadth and scale of temples across the valley in such a compact space (the valley is only 2-3 square kilometers) is awe inspiring. There are now about 2,000 temples, down from almost 10,000 at the site’s peak, so if you take a few steps in any direction, you will hit a temple. And they are all in very different states of conservation—some are recently restored, some are near original, some are absolutely crumbling. As an architect, it is a treat to take in the diversity of architecture that remains intact. You become quite good at picking out the older and newer temples—older ones have a unique onion shape where newer ones have the more traditional stupa top. CyArk gets behind-the-scenes access to all of the sites that we document, but this was the most memorable because that first glimpse of the flat valley absolutely filled with temples just takes your breath away.

MM: Between documentation and training you must have taken quite the kit with you. What hardware went with you to Bagan and how did that go?

SL: Yes we did. We always use a suite of technologies on any given project, but we kind of went all out for this project because of the diversity of features we were documenting and the fact that we were training students who are new to the process of digital preservation entirely. Over the last decade, the technology has changed immensely. We still rely on terrestrial LiDAR to serve as a base for our documentation because it is awesome for capturing structures, but in a place like Bagan, where the context is so important, we also used drones (aerial photogrammetry) to capture the landscape surrounding the temple. At each temple we would do a series of shots. A shot straight down, then we would tilt the drone’s camera 45 degrees and fly the same flight path along the East, West North and South of each structure, and the last flight would be around the temple in a circular fashion. The roofs are fairly steep and complex and not perfectly safe to be on, so using aerial photogrammetry instead of terrestrial LiDAR allowed us much greater access to these inaccessible and dangerous portions while not compromising our data quality. We also were able to use a photogrammetric rig designed by Autodesk which consists of an array of four HDR cameras that will eliminate most of the human error associated with photogrammetry and give us more surface detail than ever before.

MM: Interesting. So assumedly, you were using a copter-style drone rather than fixed wing.

SL: Absolutely, we were using a quad-copter. In this case DJI’s Inspire 1 Pro, which is their newest model. Which, incidentally, can be tricky to maneuver. So we were using terrestrial LiDAR, and drones but we were also using Structured Light Scanning which really does a great job of capturing complex geometry particularly for small objects. So if the drone gives us the roof detail and contextual landscape, Structured Light Scanning gives us that artifact-level of detail. We used it for inscriptions, or sculptures or at Loka (Loka-hteik-pan Temple), we used it to scan incredible plaster paintings depicting the life of Buddha which are just the most intricate and extensive murals you’ve ever seen, and they are actually starting to separate from the underlying wall in places.

We also introduced a slightly new workflow on the project around our terrestrial LiDAR data collection. We use the FARO Focus x330, but when we capture the phototexture data for the point cloud, we really like HDR image, which our current x330 does not support (though the newest model does) so we used the iStar from NCTech. They have a new workflow and a FARO App. So we built a little adapter that aligns the parallax points and then by synching the time in the camera and the scanner, we can avoid using the internal camera which doesn’t suit our needs and swap it out with imagery from the iStar automatically.  We have been really pleased with the results and the App they have makes post processing super simple since its plugs directly into FARO Scene. You end up with fully textured point clouds in a fraction of the time.

With so many data nerds on the trip, you can bet we pulled out all the stops. Oliver (Monson) and Anthony (Fassero) are both into gigapixel images (image containing 1 billion pixels) so they brought a Gigapan rig. I can’t imagine a better place than Bagan to use it, because of how dense the sites are. When you stand on top of one of these temples you can see other temples and stupas in every direction as far as the eye can see, so these gigapixel images will let you survey the landscape with as full of resolution as the human eye can perceive.

MM: Bringing that much gear into the field can present some serious challenges. What expected or unexpected challenges did you face onsite?

SL: The heat! It was so hot! I think it peaked above 100 degrees F and 80 percent humidity every day. So, first, You are sticky the entire project, all the time. Second, you are always looking for shade. And third, you are worrying about equipment overheating, which fortunately the FARO, our main piece of outdoor equipment, did not. And, of course, we have the usual site challenges of keeping tourists and other people out of the data.

One that we didn’t anticipate was that, being Buddhist temples, you cannot wear shoes or socks, which is fine for the interior where it is shaded and relatively cool, but on the roofs which are only accessible via interior staircases, it’s a serious problem. Being entirely masonry, the tops of those temples have the sun beating down on them all day. I would guess that the surface temperature of the stone roofs was 160-180 degrees F. We would run out, place the scanner, hit go and scurry away to what little shade we could find which was very little. That was honestly the biggest challenge.

MM: Sounds like a real team effort! What roles did everyone play onsite?

SL: This project had lots of partners and CyArk played a number of roles. The students actually took on a lot of the documentation. They had their own laser scanner, they had their own total station, so they were doing a control network, setting a survey grid and then helping with the laser scanning. We would separate to different sites each day and the CyArk team would spend a day at each temple doing the bulk of the documentation while working with one or two students in depth. Having so little time at each site means that we left a lot of the finer work to the students to complete in our absence. So they were capturing more contextual shots or the surrounds, really time-intensive high resolution scans that we can use to supplement photogrammetry from the drone and of course making sure the survey was all tied in. The students from Carleton and Yangon Technical did an amazing job of that and also performed condition assessments of each of the temples. Many of these students are in the architecture field, so they will be producing drawings, plans, sections, and the things that conservators need to provide to the Department of Archaeology and Ministry of Culture. The Ministry had chosen the sites specifically because they did not have thorough documentation and they were very significant, so this work is providing them with a real and immediate benefit as well as helping to share these places.

MM: Perfect! Which leads me to my next question which is what will people be able to see virtually that they cannot see in person?

SL: Well most of the site really. First, the trip to Bagan is pretty prohibitive for many people, particularly here in the US. It took about 29 hours to get there and maybe 30-35 to get back, so it is not a trip for the fair-weather traveler.

But on top of that, the sites themselves are really not managed for tourists. There is no artificial lighting within the spaces. They can be nearly pitch black. There is a caretaker at Loka (Loka-hteik-pan) and one at Khe-min-gazedi where the original paintings are still intact. They live in a small structure about a hundred yards from the temple which is locked unless you find the caretaker and they open it for you, which they are always happy to do, but they don’t give you much time to explore it and there are parts that are off limits like the stairs and rooftops. With only a small flashlight, you can see very little of the interior anyway, so through the CyArk website, you will be able to explore all of these sites at your leisure, and illuminated, including the restricted areas.

MM: So what is next for this data?

SL: Of course we will do our traditional web release with models and text and a virtual tour etc. but we will have more detail than ever before. With Autodesk ‘s new Remake software, we will be able to precisely align our scans and photogrammetric data to unite the near perfect geometry with near perfect surface detail, making this CyArk’s most life-like project to-date. Autodesk has been really helpful in the process and they will be working alongside us to help process this data and work out a pipeline that can churn out a high resolution mesh with textures which is something that could eventually become a part of a VR (Virtual Reality) environment or something like that. And because we have taken such care in capturing the data, your experience in the environment should be pretty true-to-life without much fidelity loss and letting you visit places that you can’t even go as a tourists. We should be launching all of this in 2016 so it is really right around the corner. I think we collected 968 gigs of absolutely raw data, so it is going to be a monstrous data set maybe even four times the amount of data once done.

MM: That is a massive data set. Well we look forward to seeing more as it becomes available. Thanks, Scott for chatting! 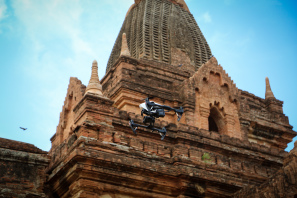 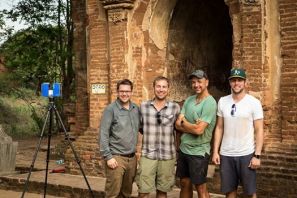 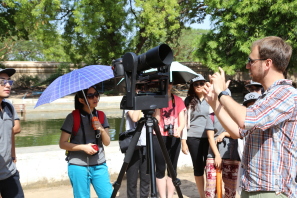