Dissemination for a Diaspora

by Ross Davison
In early January CyArk partnered with the TUMO learning center in Yerevan, Armenia to engage a new generation with their heritage and to teach methods for saving the material cultural remains. The end goal of the collaboration was for the students to create an interactive web experience in which members of the diaspora would be virtually able to return to Armenia and experience their heritage sites online. I had the fortunate honor of leading the field documentation and in-class workshop. Though I had little idea what was awaiting me in Armenia, I was thrilled to be introducing a new generation and a new region to the technology and methods we employ around the globe.

Arriving at Geghard I realized two very important things: we had underestimated how large the site was and I had not dressed for the weather. The snow capped peaks of the surrounding cliffs provided the monastery a very imposing and beautiful backdrop, but one that would give us a few issues in the documentation process. The interior of the old chapels at Geghard Monastery were still churning with tourists and pilgrims who had come to worship and drink from the blessed spring. The monastery, pushing sixteen hundred years since its founding, was still alive and breathing.

The high school students who joined the field documentation seemed just as awestruck as I was on the day of my arrival, even though many had already visited the monastery. They arrived busily chatting, but when I first asked, "So who here can speak English?", only a few shy hands rose into the air. Of the fifteen students on site with us, two admitted that they could understand me. By the end of the first day, however, it became abundantly clear that the English language skills of the students were much more advanced than they let on.

Initially we divided the class into two groups: laser scanning and photography. Those participating in the 3D scanning process learned the basics of scan locations and setting up projects in the main chapel with me while the photography team began with panoramas and site photography upstairs. Within an hour, half of the students had successfully laid out a plan for Faro Focus3D X 330 LiDAR scanner locations of the room and were proceeding to capture data, the other half had begun to experiment using the Artec Eva structured light scanner on detailed reliefs in the next room.

Over the next three days, the students documented the site with over one hundred and twenty LiDAR scans, over one thousand photos, and fifty high detail structured light scans of the intricately carved reliefs. Regardless of language barriers, new technology, tourist crowds, and snow, the students’ enthusiasm and interest never floundered. To top it off, all of the documentation had taken place at temperatures below zero degrees Celsius. To say I was impressed and delighted with this group of students would be a horrible understatement.

Their uncanny ability to absorb information on this new technology continued into the classroom and post processing. In the five days we spent in the classroom, the students learned the basics of each documentation component we consider standard derivatives at CyArk. This includes: pointcloud registration in Autodesk Recap and Faro Scene, point cloud editing and 3D animations in Bently Pointools, architectural drawings in AutoCAD, panorama virtual tour creation in PTGui, 3D modeling in 3Ds Max, video editing in Adobe Premiere, and general data analysis. Again with the incredibly short timeline, everyone took to learning and we had some very impressive results by the end of the week.

I am incredibly proud of the students who participated in the initial workshop and am equally excited to see the results of future projects when our funding goals are met and TUMO has a 3D scanner of their own. I am very confident that our partnership with TUMO will continue to educate younger generations on the importance and methods of heritage preservation. 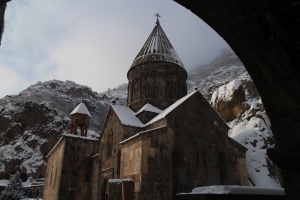 The main church at Geghard Monastery 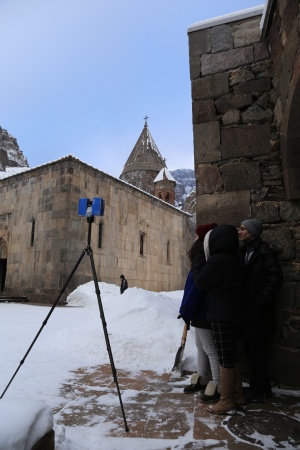 3D scanning the inner courtyard of the monastery 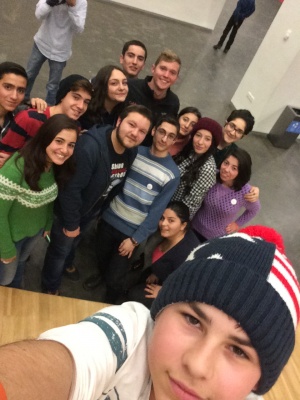 The workshop class after our final presentation