Last week, CyArk CEO John Ristevski, field director Chris Dang, photographer in residence Kieran Kesner and heritage and conservation manager Kacey Hadick returned from Chavin de Huantar in the Peruvian Andes. The site was first documented by CyArk twelve years ago in collaboration with Stanford University and CyArk returned to perform additional site documentation. In the intervening years since our initial work, a variety of new discoveries have been made. More canals and subterranean galleries were uncovered and it is now estimated that over 6 km of underground canals exist underneath the archaeological site.

The UNESCO world heritage property was a ceremonial center of the Chavin, a Pre Inca culture that existed in Peru from 1300-500 BCE. The site sits at an elevation of 3,177m (10,425ft) and in the first few days of work all of the team members were definitely feeling the elevation.

Located at the confluence of the Mosna and Wacheksa rivers, Chavin sits at the center of several major trade routes through the Cordillera Blanca mountain range. Covering 12,000 sq m (129,167 sq ft), the site includes massive temple structures with significant interior and subterranean spaces, an impressive canal system, pyramidal platforms, courts, and sunken plaza spaces. Over time, river floods have eroded much of this stone architecture and its mountainous location has also made it susceptible to destructive landslides and earthquakes.

CyArk used drones, photogrammetry and LiDAR laser scanners to document the entire UNESCO world heritage property. Over 268 scan locations were taken at the site including within the subterranean Rocas canal. While the canal is fairly large in some areas, in other sections CyArk personnel had to army crawl throughout the tunnel to complete the documentation. Despite the tight quarters, the Faro Focus X330 worked flawlessly within the narrow canal and the scans have come together in FARO's Scene seamlessly. CyArk also documented the Mosna river as during the rainy season, the river threatens the archaeological site.

In total, over 26,000 photos were taken on site through aerial and terrestrial photogrammetry that can be used to capture the texture and color of the different site features.

In the coming days CyArk will work to combine the different datasets into a single high resolution model. The resulting model can then be segmented and used by the Peruvian Ministry of Culture and Stanford University for ongoing conservation at the site. Stay tuned to follow our progress. 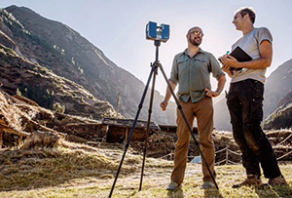 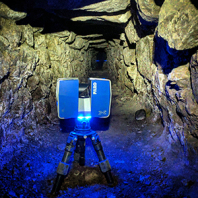 The Faro Focus X330 is placed within the Rocas canal