Documenting the Archaeology of Rapa Nui

In December 2017 with the support of Iron Mountain CyArk traveled to Easter Island known locally as Rapa Nui. This remote island located over 2,182 miles (3,512 kilometres) from the Chilean mainland is famous for the large stone statues known as moai built by the native polynesian inhabitants of the island. Constructed from the 10th to the 16th century, these large stone figures were carved from volcanic stone and were shaped to represent important ancestors and chiefs of the island. With an average height of 13 feet and weighing 14 tons the statues were transported throughout the island and positioned upon large stone ceremonial platforms known as ahus.

CyArk collaborated with the managers of Rapa Nui National Park, Ma'u Henua and the Chilean National Monuments Commission (Secretaria Tecnica de Patrimonio Rapa Nui) for the emergency documentation of priority monuments within the park. Several of the ahus are being affected by erosion especially following severe weather events and our work will be used to inform the ongoing conservation and management of the sites.

In addition to the platform sites, CyArk also documented the cave and paintings associated with the Birdman Cult at Ana Kai Tangata and the quarry of Rano Raraku with its many moai in different stages of construction. The documentation of Rano Raraku will be compared to a previous documentation of the monument completed in 2008 to determine if the monuments have shifted in the intervening years.

CyArk utilized a combination of 3-D laser scanning and photogrammetry using both terrestrial and aerial photos captured by drone. The data will be assembled to produce architectural elevations to help inform future preservation decisions.  A workshop was also was provided to the Chilean Monuments Commission, Ma’u Henua and interested members of the community to provide a background on how 3D documentation can be used on the island in the future. 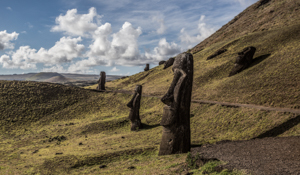 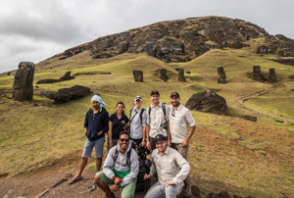