Documenting the Bridge to the Modern Age with Scott Page Design

by Makenna Murray
History is often the most significant when it is your own, and it is always a joy to discover another local treasure. Here in the California Bay Area, we are surrounded by a wealth of beautiful built heritage—but the vast majority postdates the infamous 1906 earthquake. The unassuming Alvord Lake Bridge, at the eastern edge of Golden Gate Park, is one of those few structures that withstood not only that earthquake, but every successive seismic event as well.

Scott Page Design, in Berkeley, captured the bridge in November of 2014 as a test subject after learning of the site’s unique claim to fame. The Alvord Lake Bridge is the oldest reinforced concrete bridge in the United States and has been designated a Civil Engineering Landmark. CyArk is delighted to Partner with Scott Page to share the exciting and little known history of this first bridge to the modern age.

How is it possible that this 1889 bridge, considered an experiment and a novelty, by the Technical Association of California at its construction, could be one of those few pre-quake structures standing today? The answer is in the Genius of its designer, engineer, Ernest L. Ransome’s signature innovation, reinforced concrete utilizing twisted iron bars, the forbearer of modern “rebar,” which he had patented only five years earlier.

Though not the first to experiment with reinforced concrete, Ransome’s “cold twisted” technology was far more developed than the gridded metal frames used by his competitors. Ransome’s own previous use was limited to applications in industrial flooring and ceiling trusses (Wermiel, California Concrete). The Alvord Lake Bridge, at 64 feet long and 20 feet wide, was the first structure to demonstrate the unique tensile strength lent by the addition of iron members. By the turn of the century, reinforced concrete bridges spanning over 100 feet were being realized thanks to Ransome’s work.

Though designed to mask its innovation, the bridge gained few admirers, and Ransome soon turned east, where he hoped the breakthrough would gain a following. Ironically, the devastating earthquake and ensuing fire were one of the greatest endorsements of the technology. Following that, reinforced concrete was adopted within the city building code, and has since become the invisible (by design) foundation of modern infrastructure.

Yet, for all that Alvord Lake Bridge represents, it is largely overlooked. Cracks in the faux-sandstone hammered concrete blocks (another patented Ransome design) have developed and expanded over the years aided by the deteriorating effects of vegetation and water (a rusty death knell for any iron element), and unabated through poor maintenance.

The story of the bridge struck a chord with Scott Page, who had previously donated his beautiful work at the Abbey of New Clairvaux. Scott’s passion for 3d scanning lies in revealing the unexpected and forgotten; “With our eyes stuck at a restricted range above ground level, we have a limited sense of the world around us,” he says. “3D scanning allows us to collect and record our surroundings with precision and new eyes. In terms of the built world, we are now able to see what’s before us as the designer actually envisioned it."

CyArk is thrilled to Partner with Scott Page Designs to reveal the vision and influence of Ernest Ransome’s Alvord Lake Bridge. Thank you, Scott, for donating this amazing slice of local and global industrial heritage to the Archive! 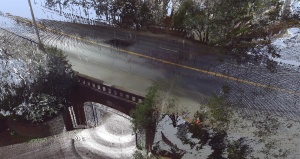 The Alvord Lake Bridge in Perspective. Kezar Drive visible above.

A cross-section of the Alvord Lake Bridge. Courtesy of Scott Page.