by Nicole Medina
A set of early human footprints discovered in Africa reveal that 1.5 million years ago prehistoric humans walked upright in a manner very similar to modern humans. The report was released by the journal Science and described the findings of an international team led by professor Matthew Bennett of Bournemouth University in the United Kingdom.

The footprints were discovered near Illeret in northern Kenya in two sedimentary layers and are dated to be 1.5 million years old. The Illeret tracks are the oldest discovered footprints to include modern foot features, including a rounded heel, human-like arch and a big toe parallel to the other toes. The footprints have been determined to have been created by Homo erectus, also known as Homo egaster. Homo erectus fossils have longer legs and shorter arms, similar to the body proportions of modern humans. Hominids preceding Homo erectus possessed much more ape-like foot features, including curved fingers and toes and a big toe separated from the other toes.

This find was especially important for anthropologists, as foot bones of early humans are rarely preserved due to their small size and are often missing from the fossil record. Footprints also preserve information about soft tissue that is typically not preserved in fossils.

3-D laser scanners were used to make detailed and highly accurate records of the footprints. Using the laser scan data and measuring sediment compression, the footprints were then compared to footprints made by A. afarensis (a hominid preceding Homo erectus) and Homo sapiens (modern humans). With this data the researchers determined that Homo erectus had a modern foot and stride: a mid-foot arch, straight big toe and heel-to-toe weight transfer.

In addition to providing data for analysis, the laser scans of the footprints also serve as a valuable record of the site in its current state. The Rift Valley of Kenya, the discovery site of many early hominid fossils and prints, is an area of seismic activity. The Rift Valley lies at a triple junction of continental plates, where three plates are pulling away from one another: the Arabian Plate, and the two parts of the African Plate (the Nubian and the Somalian) splitting along the East African Rift Zone. As a result, the area has many volcanoes and earthquakes. Earthquakes in the Rift valley can be seen on the CyArk Hazard map.

Erosion and vegetation growth can also cause damage to fragile prehistoric sites. Other important early hominid print sites, such as the Laetoli footprints discovered in 1978 in Tanzanian by Mary Leakey, have not been digitally analyzed or preserved by laser scanners. The Laetoli footprints are believed to have been made by A. afarensis 3.6 million years ago and are some of the oldest evidence known for upright bipedal walking in early hominid. Anthropologists Russell Tuttle of the University of Chicago has noted that "Weathering of the Tanzanian impressions after excavation, followed by reburial of the finds because of ground movement and vegetation growth, will obstruct further study." In the event that the site of the Illeret footprints becomes damaged, the research team of Bournemouth University and future researchers will have a digital, 3-D record of the Illeret footprints. 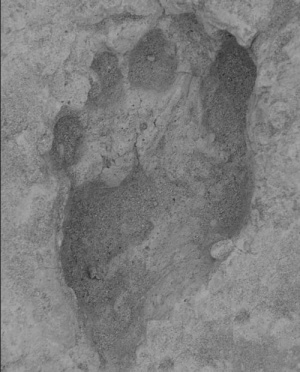 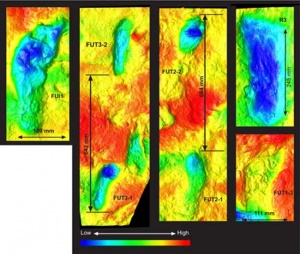