by Justin Barton
I've just completed a week long trip to South Africa where I met with our new partners, the African Conservation Trust (ACT) and the Geomatics department of the University of KwaZulu-Natal (UKZN). Together ACT and UKZN have established a close relationship in which UKZN has received grants from the South African National Lottery system to conduct various heritage and environmental conservation projects. These projects are then carried out by students receiving credit toward a survey diploma or a degree in Surveying. UKZN has two Leica C10 scanners, just purchased a Faro Focus3D as their third scanner, photographic equipment, and various software packages for all the data processing. These tools are primarily used by the two project groups within ACT: the Heritage Mapping Unit (HMU) and the Rock Art Mapping Project (RAMP). For more information about each project, please visit their website at:

In October 2010 I met with Carl Grossmann, Chairman of ACT and project manager in the Geomatics Dept of UKZN, at the Leica Worldwide User Conference. Carl had just purchased the Leica scanners and photography equipment and was starting the data collection process for the HMU and RAMP projects. He felt that CyArk could provide additional support and training and wanted to discuss an idea to create another Trust (non-profit entity) within South Africa to document and disseminate information about African heritage sites. Hearing this, I explained to Carl our mission to bring sustainable heritage mapping and data dissemination to all parts of the world through the establishment of CyArk 'chapters' and Technology Centers. A chapter would be a local group of board members to oversee local/regional digital preservation projects that would, ideally, be carried out (data collection and processing) by a partner University or similar group. Because UKZN and ACT already had equipment and software the first steps of setting up a Tech Center were complete! It would simply take some training in CyArk's standards to get them up to speed on our requirements for our projects. Additionally, Carl's idea of a new trust fit perfectly with CyArk's idea of regional chapters. It became obvious to us both that a long term partnership was needed.

A short 5 months later (sometimes schedules are difficult to coordinate), I was boarding a plane for South Africa. Our first day of business included an introduction to CyArk, our mission, and our new partnership to the ACT staff, documentation team members, and the first board members of the new to-be trust. We then spent the rest of Saturday, Sunday, and Monday morning working on data processing techniques. This included panoramic image processing and the use of Pointools software to create ortho-rectified tiffs for measurable CAD files as well as interpretive videos of the 3D data.

Monday afternoon Carl, Angus Forbes (programme director from the Geomatics Department), the RAMP team, and I left Pietermaritzburg and headed towards the Drakensberg World Heritage Site. An incredibly beautiful area of green, flat-topped mountains with high sandstone bands exposed. These sandstone bands have many under cuttings similar to those occupied by the Ancestral Puebloans in Mesa Verde, Colorado, USA. But rather than adobe structures, the Drakensberg mountains are scattered with beautiful rock art, some dating back to 3,000 years ago, belonging to the San culture. The painted art showcases various animals, hunters, and other motifs, but a highly prominent representation is the eland, a sacred animal to the culture.

The high resolution laser scanning, UV photography, and panoramic imagery conducted on site will be used to create a permanent 3D record of these fragile, ancient sites. The data will also be used by project archaeologists conducting a condition assessment of the over 550 (known) sites within the World Heritage Site boundaries. The
sites being documented in 3D are of particular value or under great threat.

Driving through the Drakensburg to as far as our cars can take us before the hike.

We spent two days (3 nights) in the Drakensberg, hiking for hours each day up steep mountain sides to get to the sandstone outcrops, crossing (and drinking from) mountain rivers, and trekking through 2.5m tall grasses and shrubbery.

All while the students carried their delicate hardware in hiking backpacks. Each afternoon we'd be sheltered from thunderstorms by these ancient hide-aways, using our lasers and sensors to capture a painted delicacy telling the story of the people millennia ago who sat on those same boulders, watching the lighting and rain in the same dramatic scenery. We are excited to share this data so those ancient stories can be told to everyone via the CyArk archive.

Training the students on using the Leica C10 scanner to document the rock art.

After returning Thursday afternoon to Pietermaritzburg, training continued. The RAMP and HMU teams joined forces and documented a local building, working together with newly taught strategies and methods for the data capture and refining their data processing skills. They were even left with a bit of 'homework' to complete in the week after my visit.

In the coming months, the first example projects from South Africa will be shared with the world via the newly established CyArk South Africa.

The scan teams and I at their headquarters in Pietermaritzburg. 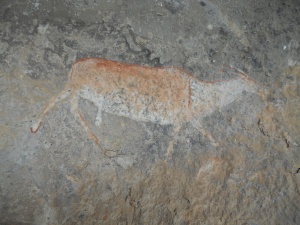 Rock art of the sacred eland. 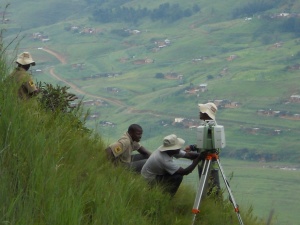 Scanning high on a ridge to capture the facade of the sandstone cliff face with the RAMP team. 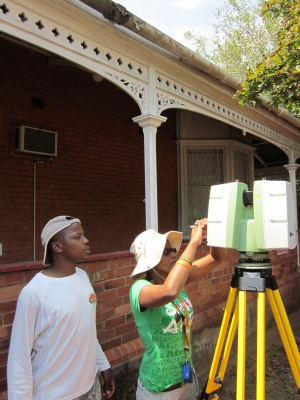