by Justin Barton
Hello from Fort Laramie (and Torrington), Wyoming! CyArk is currently in the field working to Digitally Preserve the Fort Laramie National Historic Site. Fort Laramie was once an important hub point for the American expansion into the west.

Originally established as a fur trading post in the early 19th century, it was soon taken over by the US Military to protect the continuous flow of travelers along the Oregon, California, and Mormon trails. It was also the location of the signing of a treaty between the US Government and the Lakota nation, Yanktonai Sioux, Santee Sioux, and Arapaho in 1868. Eventually the US Military abandoned the site in 1890 and it became a Homestead.

This important Historical Site has become the focus of a continuing partnership between CyArk and the National Park Service (NPS). We hope to provide greater dissemination and more accurate documentation for both web tourism and outreach, and to provide detailed documentation that can be used by conservators, researchers, the NPS staff, and the interested public while forming the basis for educational materials and site resource management.

I flew from San Francisco to Denver, Colorado on Thursday, September 17th, where I climbed into a car with a 3D scanning service provider. We continued north from the airport for three hours to Fort Laramie, Wyoming. We only had a short stay on site that first day to do some on-site reconnaissance for the busy next day. Friday we arrived at site just before sunrise—what a sight! Fort Laramie is truly in the remote emptiness of Wyoming, an outpost fort with no question. The sun breached over the rolling grassy knolls and lit up the mix of structures and ruins; I couldn’t take enough pictures!

The first day was a bit crazy. Two school buses of children, at least two tour buses of visitors, and, to top it off, a few hundred Harley riders of the Harley’s Owner Group who were stopping to visit the site as they traveled in packs for the Pony Express Ride 2009 from St Joseph, MO to Sacramento, CA, tracing the original Pony Express route.

The day ended on a very fun note when, during our last scan of the evening as the sun was setting and mosquitoes were swarming, a lone baby cotton tail bunny came out from underneath the porch of the Lt. Colonel’s Quarters (a.k.a. Burt House) and nibbled on the grass. He was perfectly still for several minutes and managed to become CyArk’s, if not the world’s, first ever laser scanned bunny! Can you spot our two-eared friend?

Today, our second day on site, went very smoothly. We collected more scan data than yesterday, and I have, as of end-of-work today, acquired over 20GB of photographic data; including 50 spherical, HDR, panoramas for the creation of an online Virtual Tour of Ft Laramie for the NPS. The panos and the scan data collected today included Digital Preservation data for the Old Bedlam structure on site. Old Bedlam was the quarters for the bachelor officers on site and is the oldest standing military building, and reputedly the oldest standing building, in Wyoming.

We have two more days of documentation ahead of us and I look forward to my third sunrise on-site in the morning. There is something immensely calming about Ft Laramie. It is quiet throughout the day with only the constant rustle of leaves being audible (the wind never stops!). I’ve enjoyed my time so far in this scenic site and also the pleasant company of the very friendly staff—and the more than encouraging words of tourists who are astounded with our technology and its capabilities. It has been many months since last I was in the field, and so far my experience at Ft. Laramie has been a wonderful reminder why I enjoy field work so much. 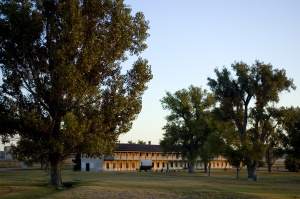 Sunrise on site, looking toward the Cavalry Barracks. 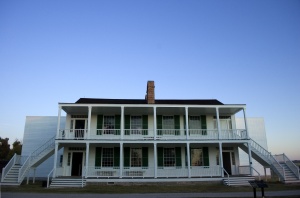 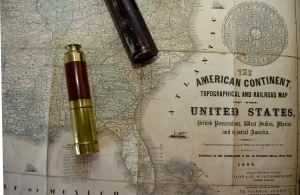 Close-up of a historic map on display in one of the quarters of Old Bedlam.