With a history spanning 12,000 years, the ancient city of Hasankeyf is one of the oldest continuously inhabited settlements in the world and contains a rare blend of architectural monuments spanning cultures and millennia. Despite a temporary delay, the flooding of the valley is imminent as part of a new dam development project that could be completed as early as next year. Hasankeyf is just one of the thousands of sites around the world that has come into conflict with infrastructure development programs and changing land use.

The city’s history is lengthy, owing to its strategic location along the Tigris river at the crossroads of important trade routes. The city bears witness to the unique blend of cultures and religions that flourished in the region and contains the remains of Christian churches as well as both Shi’a and Sunni Islamic monuments. The entire site displays incredible levels of preservation and its Seljuk period (1037-1194 CE) layout is arguably one of the most intact examples in the world. Excavations have been carried out at 39 sites within Hasankeyf but archaeologists believe that they have only scratched the surface of what can be learned from the city.

Hasankeyf has borne witness to some of history's most memorable characters and the ancient stone Artuqid Bridge that spans the Tigris River at Hasankeyf was likely used by Marco Polo on his travels to the Far East. The bridge is the only structure in all of Turkey that contains in-situ human style reliefs from the 11th Century Seljuk period. Across the river from the ancient city is the decorated mausoleum of Zeynel Bey, the only Timurid style monument in Turkey which is strikingly similar to funerary monuments of Central Asia.

These one of a kind architectural treasures will be flooded when the Ilisu dam, currently eighty-five percent complete, becomes operative, rendering every structure and object completely inaccessible. Without a significant base of tourism or industry, the government feels that it can afford to lose all that the city contains--monuments and history included. The completion of the dam will submerge Hasankeyf under sixty meters of water, inundating the ancient city core and displacing thousands of residents who have called this valley home for centuries.

While people may move, heritage cannot. The Directorate of State Hydraulic Works has been tasked with the restoration and removal of selected architectural features from key monuments in preparation for the flooding. However, the restoration program will not be able to preserve every monument or archaeological resource and any modification or removal will alter the historic fabric of the site.

We must act now to digitally preserve this irreplaceable part of our shared history. In early 2016, Europa Nostra, a citizens’ movement that works for the safeguarding of European heritage listed Hasankeyf as one of the seven most endangered sites in Europe and CyArk is working with the organization on how to best scan the site before it becomes inaccessible. The imminent removal of certain architectural elements from historic structures and subsequent flooding of the site will forever change the historic fabric of the city. With your help, CyArk will use the latest in digital technologies to perform a 3D scan of the site and preserve the rich history of the city for future generations. CyArk will design virtual tours and immersive experiences to ensure the city remains digitally available to the people of Turkey and to people around the world. CyArk has digitally preserved and archived over 200 at risk sites worldwide.

The rate of heritage loss around the world is staggering and accelerating. From ever more frequent natural disasters to highly publicized instances of deliberate destruction--our common heritage is being assailed from all sides. With your support, CyArk is working to digitally preserve ancient sites under threat. We cannot physically preserve the world’s entire heritage, but we can capture a digital record that can withstand the test of time, securely archived as a legacy for future generations.

Hasankeyf is just one of thousands of sites around the world that risks leveling in the name of progress. No matter what the future holds, we do not have to lose these sites. Everyone can do something to be part of this critical work. You can help us to capture, archive and share Hasankeyf  and other threatened heritage with the world. 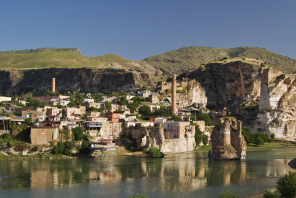 The ancient city of Hasankeyf with the Tigris River in foreground.