by Dan Walsh
The Give a Point Cloud, Get a Point Cloud contest is mostly for those attending the Leica Geosystems User Conference this past week. But really, anyone can enter if they'd like.

The rules are really simple:
Send a jpeg, tiff, gif, png, or any other image file to me at dan.walsh@cyark.org. I'll post them on this page for everyone to vote on. We have 3 framed point clouds that will be given to the submissions with the top three votes. To vote for you favorite, just leave a comment below stating which one you like the most (they'll be numbered).

Please, only vote once, and only one submission allowed per person.

These cannons were scanned from a gunship off the coast of Pennsylvania. Submitted by Kenneth Fronheiser of SSM.

You will find attached to this email my entry for your Give a Point Cloud, Get a Point Cloud contest. This scan was made using the Handyscan 3D scanner from Creaform. It was submitted by Julien Marchand. (see the video)

Submitted by Kevin Akin of Caltrans, this scanshot shows the Golden Gate Bridge, looking towards San Francisco. The point cloud data was produced by WH Pacific with an Optech Lynx mobile scanner in Sept. of 2009. It was collected during a mobile laser scan project of Doyle Drive in the Presidio.

Congratulations and thanks to everyone who submitted and voted. The images are all beautiful. 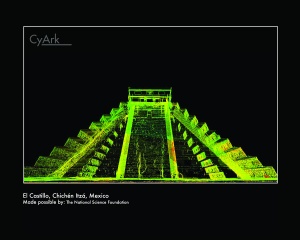 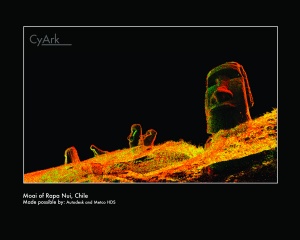