Partnership between a New York corporation, Florida university, and California non-profit leverages crowd-funding to save a National Treasure

by Devon Haynes
This week, technologists from the University of Central Florida’s Institute of Simulation & Training, local New York firm Langan Engineering & Environmental Services, and California-based non-profit, CyArk, will digitally record the New York State Pavilion from the 1964-65 World’s Fair in 3D to preserve it for future generations. Recently named a National Treasure, the once-monumental New York State Pavilion from the 1964-65 World’s Fair is at risk and requires urgent digital documentation before more deterioration occurs. The on-site laser scanning will take place this Tuesday-Thursday (June 3-5), and we encourage the press to cover this historic project. We are also excited to be sharing the 3D laser scanning technology with local students from Jericho Middle School in Nassau County, who will visit the digital preservation team on-site and learn about heritage preservation and digital documentation.

The 1964-65 New York World’s Fair showcased new space age technologies like IBM computers and Bell Lab’s “Picturephone,” so it is only fitting that on the fair’s 50th anniversary the remaining structures will be captured by 3D laser scanners to make a lasting record for the future. Today, the iconic structures from the fair—including the New York State Pavilion’s Tent of Tomorrow and flying-saucer-like Observation Towers—are dilapidated and have lost their colorful veneers. Debate continues about whether to demolish or repurpose the site, the structures’ conditions continue to deteriorate. And so, the University of Central Florida’s Institute of Simulation & Training and the non-profit organization CyArk launched and successfully funded a Kickstarter campaign for the digital preservation of the Pavilion in 3D as it appears today, before more damage occurs. IST researcher Dr. Lori Walters said, “the [New York State Pavilion] is highly representative of the space age architecture of the late 1950s-60, and as a result, what we’re attempting to do is preserve the structure digitally because we are uncertain as to what its ultimate fate is going to be.”

CyArk Vice President, Elizabeth Lee, said “CyArk is thrilled at the success of our first attempt to crowd-fund for heritage preservation. It is wonderful that the people who love this site had an opportunity to support its digital preservation, and they gave us such resounding support that we topped our fundraising goal.” With an initiative to digitally preserve 500 sites around the world in five years, CyArk anticipates launching similar Kickstarters to support at-risk sites that hold a special place in the heart of communities around the globe.

3D laser scanning is a technology that is an efficient, non-invasive way to generate a digital record of significant heritage sites for conservators, heritage site managers, and the public. The digital nature of the data produced means that it can be transformed into tools for education (such as interactive STEM lesson plans or 3D virtual tours) and conservation (including structural simulations, or accurate 2D architectural line drawings). All 3D data captured through this project will be stored within CyArk’s free, open-access online archive (www.cyark.org), which is maintained as part of CyArk’s mission to digitally preserve heritage and share it with the world.

CyArk and UCF are grateful to Langan Engineering & Environmental Services, for their financial backing—which ensured the full funding of the Kickstarter—and for their generous contribution of equipment and experienced surveying staff from their New Jersey and New York offices to participate in the digital preservation of this iconic site. Joseph Romano PLS, the Principal of Langan’s Surveying and Scanning Department said, “Langan is pleased to assist UCF and CyArk in the effort to digitally document this historic site. Facilities and structures like these are precious to not only New Yorkers, but to many worldwide. What better way to record history and provide access to this iconic site than the use of advanced technology? This scanning and modeling effort will allow people from around the globe to experience these unique facilities and create the same memory as I did back in 1964 as a child.”

The project also owes thanks to the New York City Department of Parks and Recreation for providing access to the site and permission to share with conservators and the public. Additionally, thanks is due to the Queens Museum and People for the Pavilion for mobilizing support of this project locally, and to FARO for donating the use of a FARO Focus3D X330, of its state-of-the-art, long-range terrestrial laser scanners for the on-site documentation.

Over 51 million people visited the World’s Fair between 1964 and 1965, and attendees have vivid memories of the exhibits that featured astounding visions of the future during the space age. By making a 3D record of this site and sharing the data freely online with the public, this site and the fantastical memories it inspired will be preserved for future generations.

1) CyArk: Founded in 2003, CyArk is a non-profit organization with offices in Oakland, California and Edinburgh, Scotland that is dedicated to protecting the world’s heritage by using cutting-edge technologies to digitally document and securely archive heritage sites around the world. We leverage the digital data captured at each site to enhance conservation efforts, support innovative, curriculum-based learning, and to generate project portals on our website (www.cyark.org) that provide free public access to the world's incredible heritage.

2) University of Central Florida’s Institute of Simulation & Training: IST is an internationally recognized research institute that focuses on advancing human-centered modeling and simulation technology and increasing our understanding of simulation's role in training and education. Founded in 1982 as a research unit of the University of Central Florida and reporting directly to the Vice President for Research and Commercialization, the institute provides a wide range of research and information services for the modeling, simulation and training community.

3) Langan Engineering & Environmental Services: Founded as a geotechnical specialty firm in 1970, Langan quickly became involved in many large, complex projects located throughout the eastern part of the United States. Langan leveraged its highly technical base to expand into the civil engineering and environmental disciplines and their client-focused, highly entrepreneurial culture helped evolve additional technical capabilities and enable geographic expansion into the southeast and western regions of the U.S. Langan International was formed to support global clients and partner with the world's elite design and construction teams around the world. After four successful decades, Langan’s reputation for providing innovative solutions that yield measurable value for clients continually forges new enduring relationships for the firm and distinguishes Langan from the competition. 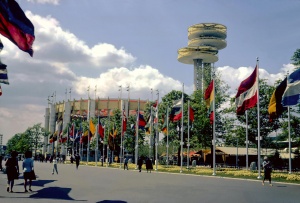 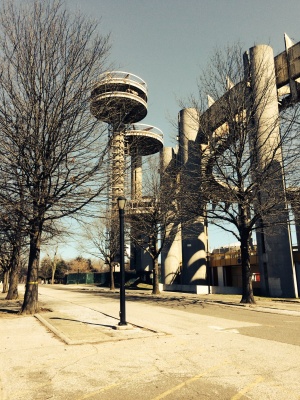 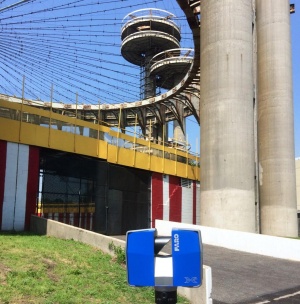 A photo from the field--digital preservation at the New York State Pavilion is underway!