by Justin Barton
Last week (Nov 29-Dec 4) saw the culmination of months of planning to bring Digital Preservation to the islands of Hawai'i. Through the concerted efforts of new allies and old partners, CyArk was able to conduct the documentation phase for the Digital Preservation of three culturally significant sites, or wahi pana (a "place" of significant meaning). This effort could not have happened with out the generous support and collaboration of Paul Horner and the Keauhou Beach Resort, Lolly Davis and the Daughters of Hawaii, Tommy Hickcox and the King Kamehameha Hotel, Superintendent Kathy Billings and the staff of Pu'uhonua o Honaunau National Historic Park, and D'Arcy Trask of Gauge Point Calibration.

The wahi pana chosen were the Hulihe'e Palace, Ahu'ena Heiau, and parts of the Pu'uhonua o Honaunau (Place of Refuge) National Park.

The joint effort was a pilot project to raise awareness of Hawaii's extraordinary need of preservation. And to promote cultural sites within the island-state that are often neglected or forgotten by the average tourists who come for beaches and sun. This data will create the opportunity to enhance conservation and preservation methods, promote virtual and cultural tourism, generate new interpretive and educational materials, and safeguard the sites digitally in the case of catastrophic loss or damage in the future.

The field work started Monday with D'Arcy scanning at the Hulihe'e Palace; I joined him that afternoon after arriving in Kona. Hulihe'e Palace varied from a summer retreat to main residence for various members of the Hawaiian Kingdom's royalty. It is currently maintained by the Daughters of Hawai'i and operates as a museum. We spent two days caputuring the exterior, immediate grounds, and interior spaces of the palace (except for a few locations that were deemed off limits for imagery due to the sensitivity of the artifacts in the room).

Scanning the exterior of the Palace.


The data for the Palace will be used to promote the site and raise awareness of its important history in the Hawaiian Kingdom. It will also prove as a base data set for future repair or restoration in the case of damage; similar to what was needed after the 2006 earthquake. Additionally, the ability to interpolate historical reconstructions becomes possible. Approximately 50 years after its original construction the Palace was plastered over to make it more European in style. Through historical photographs of the Palace and sample data collected at the Mokuaikaua Church across the street (built at the same time by the same architect), digital 3D models of Hulihe'e Palace can be created showing it in its original appearance of mortar and lava rock. Or the hut formerly on the property and used nightly for sleeping by Princess Ruth can be digitally reconstructed and re-inserted to achieve a digital recreation of the historical landscape. The hut's original location is now crossed by the modern Ali'i Drive, but the original stepping stone remains (and was also scanned). These types of interpretive elements will allow visitors to travel through time at the site, seeing its evolution and change.

Some of the initial data results from Hulihe'e Palace, direct from the field:

Front facade of the Hulihe'e Palace

Back facade of the Hulihe'e Palace

Wednesday, D'Arcy and I moved to Pu'uhonua o Honaunau National Historical Park and worked with the staff and their own 3D laser scanner to document parts of the heiau, great wall, and one of the the reconstructed canoe shelters. The park, the "place of refuge", was exactly that to ancient Hawaiians. It acted as a sanctuary for those escaping punishment (usually death) for breaking a kapu (laws of taboo) or could even be a haven for enemy warriors escaping capture. As long as you could get there alive, you'd remain so (but they didn't make it easy to get there).

This was an exceptional opportunity for CyArk to work with the NPS staff and we are grateful for Superintendent Billings' vision to bring this advanced technology to the Big Island for heritage work and for cooperating with us on this momentous effort. We are looking forward to working closely with the park staff to create a new level of documentation that will be the best and most advanced yet generated. Their embracing of this high-technology will allow them to improve conservation and management practices while creating new, high-tech ways to reach out, educate, and disseminate.

Some of the initial data results from Pu'uhonua o Honaunau, direct from the field:

The heiau, its tall ki'i, and the edge of the Great Wall


Thursday we completed the last bulk of our field work and data collection by documenting the Ahu'ena Heiau. Located just across from Hulihe'e Palace, this heiau was the personal temple of Kamehameha the Great and was essentially the first capital of the Hawaiian Kingdom. Due to the sacred nature of the site and the need to access it directly to fully document it, we had to be granted access on multiple levels. First, we obtained permission from Tommy Hickcox and head of hotel security, Kalei Villacorte. Second, the caretaker, Sam, had to approve of our trespassing on the heiau. Lastly, we had to offer our word to the spirits of the wahi pana that we were there for good and not to take or destroy; this, our ho'okupu (offering), was the final step to gaining permission to physically access the heiau.

With the extra help of the NPS staff and their additional scanner, D'Arcy and I we were able to capture the entire structure, both inside and out. Most spectacularly, we were able to capture much of the frame of the three structures on the heiau because it is currently undergoing restoration. The tealeaves that create the covering are being reapplied in fully traditional methods. This will make for a great opportunity to re-scan the heiau after the restoration is complete, allowing for visualization of the final product, mid-stage restoration, and an extrapolation of just the frame from both the interior and exterior scans. This will provide valuable research, educational, and conservation data. Additionally, the heiau is actually a 1/3 size reconstruction of the original, but from the millimetrically precise measurements of the scan, a digital reconstruction can be generated at actual size and situated within the original landscape (pre modern hotel, sea-break walls, and boat dock). And this highly revered and access-restricted structure can be virtually toured and navigated, allowing access to the otherwise taboo and inaccessible. This will bring a whole new level of interaction to the people of Hawai'i and the world for this extremely significant wahi pana.

Some of the initial data results from Ahu'ena Heiau, direct from the field:

Upclose scan data of the ki'i, including Ku, the war god.


Although it only took 4 days to document the three wahi pana, it will take collaborative efforts between CyArk and Gauge Point several weeks to finalize the data. It is our hope that these pilot projects well bring the attention that Hawaiian Heritage so desperately needs to aide its long-term preservation, digitally and physically, and to help tell the story of the Hawaiian people.

The week concluded with a presentation to our partners in Hawaii, interested individuals, and the press; some of which have already reported on the event (West Hawaii Today).


I would like to conclude with a personal thought: There are certainly moments where I feel unbelievably lucky to do the things I do. But some projects stand out as exceptionally memorable; this was one of them. To gain access to these sites, some revered and even restricted, was a great honor and I thank those who worked with us and brought us to their sacred wahi pana. 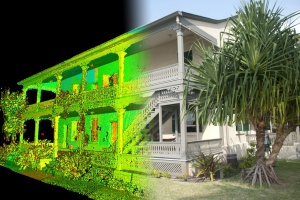 Laser scan data from the Hulihe'e Palace on the left fades into a photograph of the same view.

Staff from the Pu'uhonua o Honaunau National Park conduct their first scans of the site's heiau and Great Wall.