Help CyArk Pick the Next Project to Publish!

Cast Your Vote Before Wednesday May, 18

CyArk's archive contains over 200 projects spanning 43 countries and all seven continents, but only a fraction of that data is published on CyArk.org due to funding limitations.

EMC Corporation offers an annual grant to support the Preservation and Publishing of digital data--the winners of which are selected by YOU. Over July 7- July 21, 2016 YOU can help CyArk win up to $15,000 to publish new data from our archive by voting for the projects on the EMC Facebook Page and we want to know what project you would most like to support! A First, Second and Third place winner will beselected to recieve $5k, $10k or $15k.

CyArk has selected data sets from three projects collected over the last year for your consideration.

Option 1: Madrasa al-Japmaqiyeh in Damascus, Syria
The Madrasa al-Jaqmaqiyeh was built on the foundations of an orphanage turned convent destroyed during the Siege of the Turco-Mongol conqueror Timur in 1401. As one of the few remaining Mamluk period structures in Damascus, the building is important to the historic fabric of the city. The ongoing Syrian Civil War continues to represent a threat to historic structures in Syria and according to the Directorate General of Antiquities and Museums the Madrasa has already been significantly damaged by mortar shelling with cracks in walls and shattered windows reported.

Option 2: Temple Mayor in Mexico City
The Temple Mayor is an active excavation site, located just miles away in the historic center of Mexico City. One of the principal temples of Tenochtitlan, the former capital of the Aztec empire, Templo Mayor was destroyed by the Spanish in 1521 and the ruins were buried and largely forgotten until their rediscovery in the 1970’s.

Based on funding CyArk proposes to process all data from the site, create 3D models of various Museum artifacts and create a project page on cyark.org to provide virtual access

Option 3: Kot Diji Fort, Shah Jahan Masjid, or Derawar Fort, Pakistan
Kot Diji is a fort constructed on a limestone hill with kiln-baked bricks. The fort was considered invincible and served as the residence of the Emirs of Khairpur in times of peace. Throughout its whole history, however, Fort Kot Diji was never attacked.

The Shah Jahan Mosque was built in 1647 by Mughal emperor Shah Jahan. The mosque’s architecture is distinctive and overall it speaks volumes of archetypical Mogul style. The architect’s true skill lies in the glorious acoustics of the mosque. A person speaking inside one end of the dome can be heard at the other end when the speech exceeds 100 decibels. This enable the Imam’s sound of az’aan [call to prayer] to resonate throughout the four wings, vestibules and courtyard – making it possible to hear it from anywhere in the building. This unique feature further suggest that having a 3D model of the Masjid will be very useful in better understanding the acoustic properties of this great structure by running scientific simulations.

Derawar Fort is a large square fortress in Bahawalpur, Punjab, Pakistan. The forty bastions of Derawar are visible for many miles in Cholistan Desert. The walls have a circumference of 1500 metres and stand up to thirty metres high. The historic Derawar Fort, enormous and impressive structure in the heart of Cholistan desert, is rapidly crumbling and if the immediate preventative measures are not taken, the edifice will be destroyed. Like so many other historic sites in the country, Derawar Fort is yet another sign of old times we are poised to lose forever due to the apathy of those who are responsible for its upkeep and preservation.

Based on funding, CyArk proposes to publish one, two or three of the below sites via cyark.org. 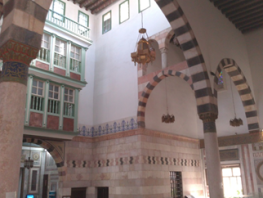