This post is the second in our blog series titled “Heritage at Risk”. Each month, we will highlight one risk factor that threatens our heritage and how CyArk’s mission can help preserve our history.

Among the various factors that threaten heritage sites, climate change has emerged as one of the most significant challenges to conservation. Rising sea levels endanger coastal sites, increased rainfall erodes mud-brick ruins, melting ice causes organic elements to rot, and desertification can warp structural elements. The character of heritage sites is closely related to climate. A site’s ability to tolerate climatic changes often determines whether the built environment survives or is lost. While the weathering and decay of building materials over a period of time is inevitable, variations in weather patterns cause ancient sites to be exposed to conditions that they would never have experienced and may not be equipped to tolerate. Thus, it can be said that exposure, sensitivity, and adaptive capability define the vulnerability of heritage to the impacts of climate change. It has been widely publicized that the rising waters and other impacts of climate change are jeopardizing the built heritage of Venice and its lagoons. Lesser known but equally powerful examples of changing climate endangering heritage are the cities of Leh-Ladkh in India, and Chinguetti in Mauritania, both of which are experiencing threats to their earthen heritage.

Mud houses in Leh damaged by flash floods of 2010. (Photo credit: The Hindu).
The town of Leh is perched in the serene Himalayan region of Ladakh and once served as an important stop for merchants and traders on the famous Silk Road. It is known for its cold desert climate with very little rain or snow during winters and its mild summers. The town is dominated by the ruins of the Leh Palace, a nine-story palace from the 17th century, which is surrounded by residences and temples belonging to different Buddhist monasteries. The layout of the old town, with its narrow alleys and lanes surrounded by ancient adobe structures, gives a rare glimpse into the town’s past. However, changing weather patterns, including increased rainfall in the last few years, has been cited as a cause for concern by the World Monuments Fund, which added Leh Old Town to its Watch List of the world's 100 most endangered sites in 2008. In 2010, flash floods from a cloudburst brought severe destruction to the region--damaging the ancient buildings and killing hundreds of people. Much of Leh’s famous earthen heritage was destroyed, with many adobe structures being washed away or severely eroded by the rising water.


While the town of Leh has become more developed in the last 10-15 years with minimal planning, the greatest threat to the region’s heritage thus far is not the changing settlement patterns but the increased rainfall in a usually arid region. Recent meteorological records for the area show erratic precipitation patterns, and the winters now fluctuate between being mild and extremely snowy. As evidenced by the cloudburst and flash floods in 2010, the unpredictable weather is taking a toll on Leh’s heritage and the volatile climate—fluctuating between various extremes--makes conservation a challenge. The changing climate has also led to the melting of the region’s glaciers, which were once the main source of water for crop irrigation.

Mud brick houses in Chinguetti town.(Photo credit: Smithsonian Magazine).
In contrast, the earthen heritage in the Chinguetti region of Mauritania is battling another form of climate change--desertification. The caravan cities in the Chinguetti region were developed in several stages throughout the 12th-16th centuries and served as a center for Islamic culture and a trading hub for the caravans on the Trans-Saharan trade route. The region is known for its beautiful earthen architectural expressions including the Ksour (medieval trading centers) of Chinguetti, Ouadane, Tuchitt and Oalata, which are listed as UNESCO World Heritage Sites. These towns exhibit the rich vernacular character of Saharan architecture. Reddish dry stone, mud-brick walls, and flat roofs built with palm beams and palm frond matting form the core of the urban fabric. Many houses feature hand-hewn doors cut from ancient acacia trees, which no longer exist in the region. Narrow streets are flanked by houses with courtyards or patios. The streets open out to a mosque located in the center of the town.

Courtyards engulfed in sand as a result of desertification. (Photo credit: Smithsonian Magazine).
Chinguetti is now largely engulfed by the sand dunes of the western Sahara desert. Climate records from the area over the last century show increasing temperatures. Changing rainfall patterns and the encroaching desert have become a constant concern and have had significant impacts on both the community and the region’s built heritage. Additionally, rising incidences of unpredictable flash floods and subsequent erosion also pose a threat to the historic towns. Although the region’s beautiful earthen architecture is remarkably well preserved, socioeconomic and climatic changes have resulted in many towns’ abandonment as the inhabitants migrate elsewhere. Now, much of Chinguetti's old town has been buried by the rapid incursion of sand dunes. Soaring temperatures have caused many structures to dry out and break apart. The extremity and change in the micro-climate of the region climate poses a serious challenge to the structural integrity of this valuable heritage.


The examples of the endangered history in Leh and Chinguetti point to the fact that our global environment is changing. Structures made of mud or mud-brick are often vernacular in nature and hence are very deeply linked to the environmental conditions of their region. Utilizing mud as a construction material is advantageous because it needs very little modification from its source. It is frequently employed as a building material in dry or arid regions, but with changes in climate bringing increased, decreased, or erratic rainfall, even with careful maintenance earthen built heritage is at risk of melting away. The challenge with identifying climate change as a threat to heritage is that changes in the environment’s effects often build up gradually over time and are seemingly invisible until it is already too late. It is only after a long period of time that the adverse effects are obvious. This makes historic structures worthy of study, and it points to a need for future changes to be calibrated in advance. Climate change predictions are mainly based on climate models that are constructed from studying the current climate system that includes the atmosphere, ocean, land surface and biosphere, and the factors that inﬂuence it such as greenhouse gas emissions and future socioeconomic patterns of land use.


CyArk's process of digitally documenting, archiving and disseminating may provide a platform to monitor and record the present condition of these heritage sites and set a baseline for further research. With the measurable digital data produced by 3D laser scanning and photogrammetry, there is the possibility that the data recorded over a period of time could be compared to assess changing trends, to study the vulnerability of our heritage to the future impacts of climate change, and develop mitigation strategies in their response. Additionally, transfer of the 3D laser scanning technology to regions with changing climates would provide a tool to monitor the impact climate change has already had on heritage sites. While it is only one step in an extensive process, CyArk believes that digital documentation has the potential to act as an important tool in addressing the threat climate change poses to our global heritage. 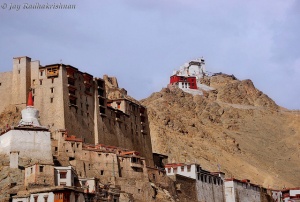