A Predicament to the History of the Walled city of Lahore

This post is our very first piece from our blog series titled "Heritage at Risk". Each month, we will highlight one risk factor that threatens our heritage and how CyArk’s mission can help preserve our history.

An emerging issue in recent years is the threat to cultural heritage, particularly historic cities, posed by inappropriate residential, industrial, and tourism development. Rising levels of urbanization in the developing countries of Asia and Africa are transforming large rural societies to predominantly urban regions. It is expected that by 2050, the urban population of the developing world will be 5.3 billion; Asia alone will host 63% of the world’s urban population. The Indian subcontinent contains many cities that date back several centuries. With the world turning into a global village, urban encroachment is one of the major factors endangering historic cities, and the pressure of economic development is seen as one of the underlying causes of this daunting threat.

A challenge for cities rich in heritage and valuable monuments is reconciling their ancient history with modern society. The Walled City of Lahore, Pakistan, is one such example and it has been significantly altered by recent development. The city was formed by the Sultans of Delhi around the 11th century and soon emerged as a major center for Islamic culture. Ancient Lahore was extensively invaded and plundered, most famously by the Mughals, but eventually stabilized. Thirteen elaborate gates were constructed to control access into the walled city. In 1857, the city walls were once again demolished, this time by the British, who destroyed many of the gates and replaced the walls with gardens--some of which exist even today. In 1947, a substantial part of Lahore’s Old City was again devastated during the strife that broke out during the partition of the Indian subcontinent.

The walled city of Lahore today is spread over an area of about 2.5 sq.km on the north-western side of its metropolitan counterpart. The historic core that was once a labyrinth of mohallas (alleyways) and bazaars (markets) is concentrated with monuments such as the Lahore Fort, Baadshaahi Masjid, Wazir Khan Mosque, Data Durbar Complex and buildings and architecture spanning several centuries that reflect the city’s cultural diversity. Despite its tumultuous past, the city has retained much of its historic urban form. Though traditionally the city was an organized blend of residential and related uses, in recent years it has succumbed to commercial pressures and many areas of Lahore are showing symptoms typical of urban-decay, such as a deteriorating infrastructure, population out-migration, dilapidation of the built fabric, and commercial congestion. Old houses and havelisare intermittently being replaced with unplanned and inferior constructions which are incongruous with the overall aesthetic, integrity, and character of the city. Of the historic buildings that remain, many have been encroached upon by sprawling new construction. Many of the city’s ancient monuments are in urgent need of conservation. Of the thirteen gates that stood in the past, only six survive today, many of which are in immediate need of repairs and restoration. Poor documentation and records have only added to the loss of valuable heritage.

An initiative for the conservation of the walled city was first taken in 1980 by the Lahore Development Authority’s Conservation Plan, which identified buildings of high architectural and historical importance and submitted proposals to conserve them. Since then several projects have been outlined, and with supportive funding by the World Bank, a handful of them have been successfully implemented in an effort to restore the city to its former glory.

In recent years, urban heritage has become an invaluable asset for the growth of preservation architecture, historical research, tourism, and many other fields. A city’s built heritage reflects the values of the past, but also represents cultural identities- history’s living expression through the traditions and artistic trades that have been passed down through generations. While it is important to envisage a strategy to protect and physically restore built cultural heritage such as monuments and archaeological sites, the heart of urban heritage lies in the traditional and artistic values historically linked to the people and the community; if these values are lost, conservation itself loses its main purpose and gives way for other types of socio-transformation processes, such as the sprawling souvenir carts selling commercialized goods to tourists in Lahore today. As can be seen through the experience of Lahore, the most pressing task for heritage professionals is to redefine the principles of urban conservation and form policies for their management, while coping with the growing changes in society.

In a situation where heritage conservation has always been regarded as a non-development sector due to lack of resources and expertise, CyArk's process of digitally documenting, archiving and disseminating may be the best hope of capturing Lahore’s cultural heritage sites so they are not entirely lost to future generations. With the measurable digital data produced by 3D laser scanning and photogrammetry, there is the possibility that the endangered monuments and historic structures of Lahore can be conserved, restored or one day rebuilt to their former glory. Additionally, transfer of the 3D laser scanning technology provides local technicians with a tool to defend their city’s heritage and opens the door to the creation of a new sector in Pakistan’s economy. While it cannot resolve all of the complex issues facing cities such as Lahore, digital preservation is an important first step. 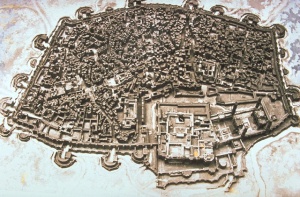 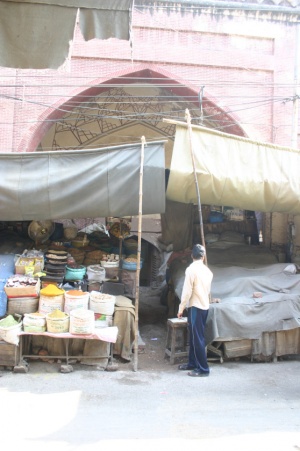 Encroachments near the boundary (photograph by Varda Nisar, from his travel diaries)