Honouliuli and the Natatorium - working with Mid-Pacific Institute in Honolulu

by Alexander Reinhold
At the start of April 2015, CyArk, in conjunction with our tech center at the Mid-Pacific Institute in Honolulu and the National Park Service, scanned Honouliuli , the former World War II Internment Camp site which confined high-profile Japanese-Hawaiian citizens whose community influence was deemed a threat. The site was located in a large, sheltered gorge on the west side of the island of O'ahu. All that remains at the site is a handful of building foundations, one semi standing structure, a partially buried aqueduct system, and sporadic guard tower foundations straddling the aqueduct. The site is now overgrown with trees and vegetation, but originally was quite open, in an effort to advance surveillance. Given the orientation of the valley, the heat and lack of breeze (except for the occasional flurry of wind) can be oppressive. Lectures from NPS staff on-site further helped to convey the inhospitable conditions that the camp's 320 incarcerees and over 4,000 foreign prisoners of war endured. Only recently acquired by the National Park Service from a private owner, Honouliuli was declared a National Monument in February by President Barack Obama.

Each day we were joined on-site by a group of students from Mid-Pacific Institute. The rotating teams brought with them the Faro X130. Having studied the history of Honouliuli back in the classroom, this was a great opportunity for the students to experience the site for themselves. This project was funded, in part, by a grant from the U.S. Department of the Interior, National Park Service, Japanese American Confinement Sites Grant Program. Any opinions, findings, and conclusions or recommendations expressed in this material are those of the author(s) and do not necessarily reflect the views of the U.S. Department of the Interior.

Check out some of the work the students have done here.

The following week, CyArk returned to Mid-Pacific Institute to lead a refresher training with several teachers around their Faro devices and new registration tools like Autodesk Recap 360 Ultimate. The training included familiarizing the teachers with two new devices, the Artec Eva and Spider scanners. The teachers will work with students to document artifacts using the Eva and Spider as part of their new museum studies class.

As part of the training, CyArk and Mid-Pacific also had the opportunity to scan the Waikiki Natatorium , a one-of-a-kind World War I War Memorial located in Honolulu. Natatoriums, large structures housing public swimming facilities, were once found widely across the US and beyond. At Waikiki, this living monument to the Hawaiian citizens who served in the Great War, the Natatorium is fed from the sea--an homage to the Island's ocean legacy. Following the attack at Pearl Harbor, the Natatorium became a training site for American G.I.s, and was returned to the City and County of Honolulu following the war.

Unfortunately the site has fallen into a state of disrepair and the cement decking around the pool has started to collapse in many places. The site is closed to the public except for the bathrooms at the rear. There is great contention over the future of the Natatorium. Many proposals for demolition have been presented, yet the Natatoium endures.... for now. CyArk was delighted to partner with the National Trust for Historic Preservation to digitally preserve this important "National Treasure."

Our trip to Honolulu was great. We captured two very unique sites with great significance to the history of the islands and their current residents, and both sites are also currently at-risk. It was great to see both teachers and students excited about scanning these compelling sites of Hawaiian Heritage! 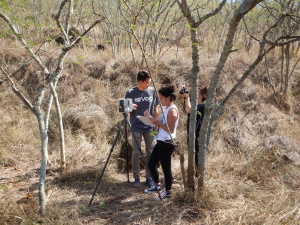 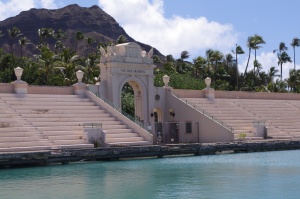 Looking across the pool at the Natatorium 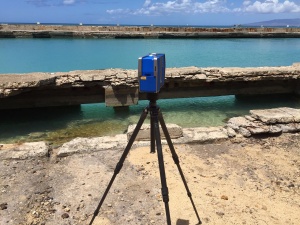 Faro x330 scanning the collapsed deck of the Natatorium