Guest blogger: Lisa Barrett has completed two years at Cal Poly, San Luis Obispo pursuing a degree in architecture. Originally from San Tan Valley, Arizona, she is spending the summer in the Bay interning with CyArk. Outside of work and school, Lisa enjoys going on outdoor adventures or settling in with a good book.

I was sitting in my architectural history course at Cal Poly last fall when my professor, Dr. Don Choi, first introduced me to CyArk’s work. It didn’t take much personal investigation to realize CyArk’s efforts to document our heritage as a highly valuable endeavor, and something I wanted to be a part of. So now I write, with most of the summer behind me, on my two-month internship at the crossroad of history, technology, archaeology, and architecture (or how I jumped into digital archiving with both feet).

Any architect can tell you the importance of precedent structures conceived by generations past. Those that come from an architectural background (like myself) also like to draw inspiration from just about anything – from cliff dwellings in the American Southwest to Ancient Roman villas to landscapes to cell structure. It seems to me that architecture and archaeology should naturally work together; and because architecture is so interested on advancing the profession by way of technology, it was easy to slip into an organization that similarly seeks to advance their profession. Much of my time here has been spent in front of a computer not only learning how to navigate software programs, but also what it takes to present and archive sites. I have developed cloud models of scanned sites, created and edited graphics for CyArk’s website and iPad Apps, and created plans and elevations of sites (only to name a few of the things we work with in the office). I have had the opportunity to work with projects around the world, such as Ancient Stabiae in Italy and Founder’s Rock in South Dakota. The highlight of my work here, however, comes from a site much closer to home-base: John Muir’s home in Martinez, CA.

Last week I spent a few days at the John Muir National Historic Site scanning the house and remaining 9 acres of the original 2300 that made up the property. Despite the mild Martinez weather and the attractive peaches growing in the orchard, most of my time was spent scanning the interior of the house, a Victorian mansion built in 1883. While exploring the nooks and crannies of the house’s 15+ rooms (lugging the scanner up and down stairs, in and out of the basement, attic and bell tower, carefully avoiding disturbance of artifacts and displays throughout the house) I found that I was most affected by the people I encountered. In speaking with NPS rangers I gained tons of information about John Muir and his house (like his trips to Alaska to study glaciers, his wife’s role in managing the property, or the fireplace in the East Parlor which was rebuilt after the earthquake of 1906.) From the museum curator, Sara Hay, I was able to get a glimpse of museum life and what her side of preservation entails (from keeping displays historically accurate to keeping artifacts physically intact). Conversations with Richard Davison from Scottish Natural Heritage provided the Scottish side of the Muir story, where Muir was born. Finally, by simply being inside the house with a funky machine on a tripod, I attracted a lot of attention from visitors to the site. As I tried to explain the scanner and the process to children, foreign travelers speaking broken English, technically challenged regulars, and a few CyArk fans, the number one question I received was “why?”

So why is CyArk documenting the John Muir house? Well, the standard answer I gave to curious inquirers is to have a record of the site should anything happen to it and use those records for educational purposes. The project, made possible through a collaboration between National Park Service, Scottish Natural Heritage, Historic Scotland, and John Muir Birthplace Trust, documents both the Martinez home and Muir’s childhood home in Dunbar, Scotland and seeks to provide a thorough data set connecting John Muir’s influence globally.

All of that is true, but perhaps a more passionate answer would be: because John Muir represents a significant part of American life and his legacy needs to be preserved in order that future generations might continue to learn from him. Without John Muir, where would our beloved National Parks be? What base would the conservation movement stand on? It is my hope that this project increases the awareness of and accessibility to John Muir’s legacy, and I am proud to have been a part of it!

To sum up my summer, I have quickly been transformed from an architecture student with a persistent interest in history into a digital techie with a dedication to heritage documentation. With two weeks left at the office, I’m sure I have much left to learn. Still, I thank CyArk for their work, for sharing their knowledge and technology with me, and for passing on the preservation passion! 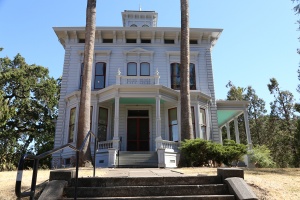 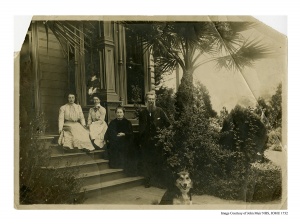 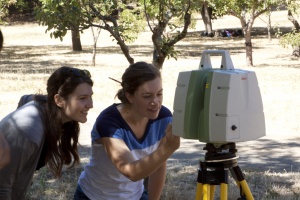