by Elizabeth Lee
The digital preservation of famed naturalist John Muir’s birthplace in Dunbar, Scotland and his family home in Martinez, California continues to build ties and bring nations together in exciting ways. Earlier this month representatives from the Scottish Government, Visit Scotland, the U.S. National Park Service, the Sierra Club, the John Muir Association, and CyArk attended a special ceremony for the unveiling of a plaque commemorating the joint initiative at John Muir National Historic Site.

We were honored to host Mr. Humza Yousaf, Scotland’s Minister for External Affairs and International Development and Mr. Mike Cantlay of Visit Scotland. Ben Kacyra and I were in attendance from CyArk. From the National Park Service Superintendent Tom Leatherman attended to represent John Muir National Historic Site. Members from the John Muir Association were also joined by Ms. Barbara Williams from the Sierra Club, the organization established by John Muir in 1892 to lobby for environmental causes and the protection of wild places within the United States.

The John Muir Association hosted a picnic lunch at the John Muir Historic site and Superintendent Tom Leatherman gave the group a tour of John Muir's home which was digitally preserved as part of the Transatlantic effort. The day closed with the unveiling of a beautiful plaque, featuring flora from California and Scotland, which was carved by stone masons at Historic Scotland to commemorate the Scottish and American partnership to preserve Muir's legacy.

This special event was the capstone on the efforts to 3D laser scan Muir’s homes, which took place last August and September through a collaborative effort between Historic Scotland, Scottish Natural Heritage, the U.S. National Park Service, and the John Muir Birthplace Trust. The digital documentation came on the heels of 2013: Year of Natural Scotland, leading up to 2014: Year of Homecoming, and it was an apt project to represent natural heritage and the global impact of Scottish nationals. Conservationists at both of Muir’s homes will be provided with the 3D data, and it will be used to enhance site management and interpretation.

CyArk was thrilled to participate in this project to bring nations together through the celebration of heritage and John Muir’s transatlantic legacy. Take a look at the in-progress pages for John Muir’s birthplace and John Muir National Historic Site, and stay tuned for the upcoming release of full project pages. 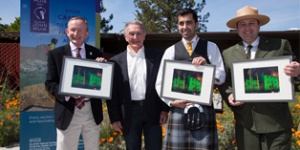 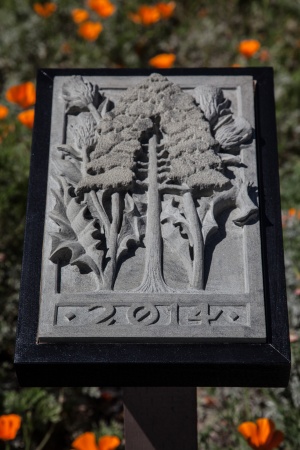 The plaque unveiled April 6 commemorating the transatlantic project to digitally preserve the heritage of John Muir.